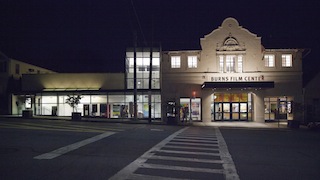 Since last August the Jacob Burns Film Center in Pleasantville, New York – in addition to being one of the country’s premiere art house cinemas – has been a construction site. Work began then to add two new screens and other amenities to the complex, bringing the total number of screens to five. When completed next month those new theatres will greatly expand the center’s already impressive capabilities.

In addition to the new theaters, the JBFC will reconfigure the Jane Peck Gallery into a café and community gathering space for members and the public. The final piece of the expansion will be to replace all of the original seats in the three existing theaters.

“We look forward to creating a physical space that will encourage dialogue and connection.” “We need a facility that can enable us to fully execute our mission,” said JBFC board chair Hugh Price. “Many people embrace this important next step, as we have already raised 60 percent towards our fundraising goal to meet the cost of the project. We now look to our community, as we need broad financial support to successfully complete every essential component of this campaign.”

“This is a natural evolution in the life of the JBFC and a direct response to an insatiable demand from members, filmmakers, students, and teachers,” said JBFC executive director Edie Demas. “It is also a shining example of a community coming together to learn, grow, and relish in the shared experience.”

Nat Hoyt, the original lead architect for the conversion of the old Rome Theater into the three-screen JBFC Theater, in 2001, is working with the team who built the JBFC’s Media Arts Lab in 2009, KG&D Architects of Mt. Kisco.

Yorke Construction Corporation of Manhattan is the building contractor. “The theaters are opening March 6 and will immediately be open to the public,” said Lori Zakalik, marketing assistant. “We start public screenings in there that day. The second round of fundraising will be for the gallery space on the third floor (not to be confused with the lobby downstairs). “

It can’t come too soon for programming director Brian Ackerman. “We opened with three screens in 2001 and we overran our capacity very early,” he said.

Ackerman said the existing three theatres seat 250, 140 and 72 people. Those three all can screen both 35mm film and digital cinema. Although many, if not most of the center’s employees and supporters would count themselves as film purists, the Jacob Burns adopted digital cinema technology earlier than most art houses.

The main projection booth currently serves screens two and three and will also serve the new screens. A separate booth serves the biggest theatre. all three existing screens, has three NEC digital cinema projectors: an NC3240C, NC1200C and a new NC900C. The main theatre has Dolby 3D. In addition there are two Kinoton FP30E Premiere 35mm film projectors, which the center bought used when they first opened. The Jacob Burns Film Center three full-time projectionists on staff. Jesse Green, the center’s technical director, credits them with keeping all the projectors in excellent working condition.

Ackerman said currently some movies, for a variety of reasons, only get a single screening. This can be for many reasons including limited access to a unique print or to limited audience interest. Screen 3 today is often used to film series. The new theatres will seat 45 and 35 people. Ackerman said having two more screens will not necessarily change how he schedules movies today but “it will enable us to do more programming.” The new screens will give him, “A tremendous amount of flexibility,” he added.

The Jacob Burns currently shows on average 400 films a year. Ackerman said he has no idea yet how much that number might increase with the new screens. “We’re looking at things now,” he said. But there was genuine excitement in his voice when he said the new screens would allow him to show more of “the smaller films that have fallen through the cracks.”

One of the challenges of the renovation has been the need to keep the center opened during the process. This has limited the hours of construction, essentially, to seven in the morning until three in the afternoon.

Green and Zakalik recently gave me a tour of the construction site. It was after four in the afternoon and some quiet construction work was still going on upstairs while in the lobby downstairs people were cueing up for a screening.

The systems integration is being supervised by North American Theatrix. The new theatres will feature Christie Vive Audio speakers. Green said North American recommended them both for their quality and their compactness. “Christie had speakers of the size we wanted,” said Green.

Size was an important consideration in the entire process. The new theatres are being built in the existing building’s footprint, a serious design challenge. In part because of those space constraints, Green said, they opted for boothless projection. The new NEC NC900 projectors will be mounted in a wall and will be accessed in a hallway running along both new theatres.

Fund-raising for the rest of the renovation is already underway and the effort should get a boost when the public sees the new theatres. Zakalik said, “We will reconfigure the Jane Peck Gallery into a café and community gathering space for members and the public and the final piece of the creative expansion will be to replace all of the original seats in the three existing theaters. Phase 2 is expected to be completed by spring 2016.”