It’s All About the Movies 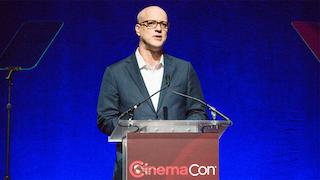 In his annual address last week to the CinemaCon 2018 opening day audience, John Fithian, president and CEO of the National Association of Theatre Owners, gave a speech laced with familiar, and historically sound, themes: good movies drive people to theatres and good movies need to be seen on the big screen. Yes, there are months when box office numbers are down but those are dramatically offset by months where people of all ages fill the seats for the newest big movie. Yes, there are, and always will be, competition for moviegoers’ time and attention, but nothing will ever replace the big screen experience. Period.

First Fithian put the latest downturn in attendance in perspective.

“In 2017, the domestic box office hit $11 billion for the third year in a row, and fell only 2.5 percent from 2016’s record-setting haul,” he said. “After posting the biggest first quarter of all time in 2017, business slowed during the summer. But that slowdown reversed quickly with the timely arrival of It, and a fourth quarter when we saw robust box office for such titles as Star Wars: The Last Jedi, Jumanji: Welcome to the Jungle, The Greatest Showman, The Shape of Water, Lady Bird and Three Billboards Outside Ebbing Missouri.”

“The point here is simple: our business rises or falls on the movies in our cinemas. It doesn’t stand to reason that movie-going habits have permanently changed based on the performance of any given movie, weekend, month, or quarter. North America remains the biggest market in the world. It accounts for roughly 30 percent of global revenue from only five percent of the population.”

Fithian remains optimistic about exhibition’s future. We are now a global industry, he said, and globally, we had our first $40 billion year in 2017.

“The global box office has grown 17 percent since 2012,” he continued. “Global growth will continue both in existing markets, and new ones. In an historic decision for NATO and our members, Saudi Arabia will allow movie theaters after an absence of nearly four decades. Congratulations to our largest member, AMC, for opening the first Saudi cinema last week. The Saudi market could reach $1 billion in box office in a few years.”

In that same vein, Fithian noted that last June in Barcelona, two trade associations and twelve leading exhibition companies from every corner of the world announced the formation of a Global Cinema Federation.

NATO is part of that effort. Fithian said, “Our goals are ambitious as we work with exhibitors around the world on such crucial issues as theatrical exclusivity, movie theft, technology, international trade and investment, music licensing, and access for patrons with disabilities.”

“Looking ahead, we remain very optimistic about the future of our industry,” said Fithian. “With Black Panther, we had the first billion dollar global hit to open in February, and we had the second largest first quarter of all time. We are heading into a summer season that should be spectacular. Advanced ticket sales for Infinity War, which opens in only three days, are beyond anything we have seen before. And the remainder of the summer slate looks just as impressive.”

“Would Black Panther, Get Out, Wonder Woman or any other major recent hits have become significant cultural landmarks if they went straight to streaming?” he asked. “Of course not. Their impact is a direct result of people experiencing them in a communal way. During Black Panther’s opening weekend, social media lit up with excited moviegoers taking pictures in crowded theater lobbies.”

To critics who assert that younger people are glued to their smart phones, Fithian said, “The idea that younger adults aren’t passionate moviegoers is a myth. According to data from comScore—NATO’s official data partner—moviegoers aged 18-44 constituted 63 percent of the total box office in 2017—up from 61 percent in 2016. 13-24 year olds accounted for 36.1 percent an increase of more than 35.6 percent the previous year.”

“I have worked with NATO members for 26 years,” he said. “I can’t begin to tell you how often reporters have asked me if the movie theatre industry is dying. Every downturn in admissions is a sign of secular decline, every innovation or improvement is intended to save the movie theatre business. There has been a lot of hype about the next disruption. VHS. DVD. Streaming. Shortened windows. PVOD. Subscriptions and simultaneous release. Yet we never die but remain a strong business in the face of disruption everywhere else in the entertainment landscape.”

“How can an August 2017 that was bizarrely light on titles be the warning sign for secular decline when the first quarter 2017 set a record for box office and attendance?” he asked. “How can it be secular when October roars back, the fourth quarter is up year over year and turnstiles are spinning in February 2018? When the second quarter in 2018 explodes in growth – some analysts predict it will jump 18-20 percent – will that be a sign that we are experiencing secular growth, or is it a sign that when the movies are compelling, discerning audiences will turn out in massive numbers.”

“This isn’t the first time I have made this argument,” Fithian concluded, “and I’m sure it won’t be the last. We will be here next year, and the next year, and for years to come.”