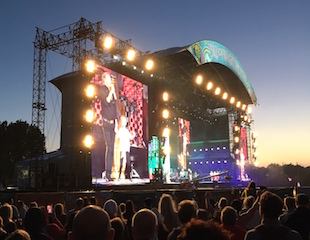 Snell Advanced Media’s LiveTouch replay and highlights system and its Kahuna 9600 production switcher were central to the first live UHD production workflow of the 2017 Isle of Wight Festival. Based in High Wycombe, UK, CTV Outside Broadcast has 12 trucks in operation and has provided live coverage for a wide range of events including The European Golf Tour, The London Marathon as well as primetime studio-based programs including Strictly Come Dancing and The Brit Awards.

CTV were selected to supply UHD OB facilities for this year’s Isle of Wight Festival and selected three of SAM’s LiveTouch replay and highlights systems to complement its UHD Kahuna production switcher at the heart of its existing workflow. Produced by CC Lab, this year’s event, featuring Rod Stewart, Run DMC, Arcade Fire and David Guetta, was the first major music festival to be broadcast in both UHD and HD with 5.1 audio. Because of Kahuna’s multi-format capability, CTV were able to deliver mixed formats including UHD, HD, SD and for VOD.

Two of the LiveTouch systems were used to record the live feeds from the two main music stages, and the third was used to handle live replays, interviews, voxboxes and daily highlights. In total, six UHD streams were recorded, accounting for 36 hours of UHD content on each of the four days of the festival.

Hamish Greig, technical director, CTV said, “SAM’s LiveTouch was selected for its ability to deliver a fast turnaround workflow and for the networking capability that it offers. The systems joined together and networked easily. The native XAVC support offered by the LiveTouch and its built-in Rio editor meant it was very fast to drop in shots almost live.”

The Presentation program mix, Main Stage mix and the Big Top mix were captured by multiple Sony HDC4300 cameras. Directorial program cuts for each mix were carried out – in UHD – using the remote panels of a 6M/E SAM Kahuna switcher. The main panel of the switcher was used to simultaneously produce the combined live program output.

In a dedicated OB unit, content from the stages was also recorded on to CTV’s three LiveTouch servers and used by three independent replay operators who were responsible for clipping acts and creating highlight playlists for end-of-day programming. All UHD content was streamed between the three LiveTouch systems in a 2in/2out set-up. Throughout the live festival days, graphics, bumpers and stings were created in Adobe Premiere and imported via SAM’s Fileflow transcode and delivery workflow using XAVCi Class 300 codec wrapped in an MXF container.

CTV’s Greig added, “The ability to record, transmit and edit three productions in UHD and 5.1 simultaneously was a big ask, but the workflow stood up to the pressures, delivering an enjoyable and immersive UHD experience. It would have been impossible to complete this project without Kahuna’s unique multi-format capabilities. LiveTouch and Kahuna exceeded all expectations and was the perfect workflow that this operation required.”

Neil Maycock, executive vice president and general manager, media software solutions, Snell Advanced Media, said, “We’re very proud that SAM technology has been central to such a milestone for an event with the history and legacy of the Isle of Wight Festival. The UHD workflow used for this year’s event perfectly illustrates that LiveTouch and Kahuna can cope, not just with the demands of a live sports environment, but have the flexibility and robustness required to handle the challenges of a complex operation like this one.”