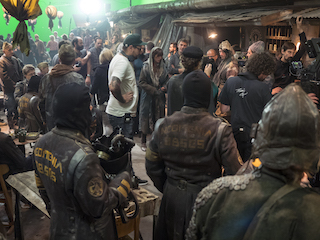 The filmmakers behind the Iron Sky saga are widening the spectrum of productions in their business, inviting fans to start producing professional-quality content in the Iron Sky’s universe. Titled Fanchise, the initiative is an open call to all Iron Sky fans, young filmmakers, game developers and innovators to pitch their concepts of maximum 10 minute experiences – games, short films, VR experiences, graphic novels – whatever inspires the most.

In the first phase, Iron Sky Universe will select the best pitches, which will then be taken to the web-based task management toolkit Iron Sky Online Film Studio, created to host and guide these productions. Crowdfunding, which Iron Sky filmmakers have successfully been doing for more than a decade now, will be one of the key sources of funding for these productions.

Iron Sky The Coming Race, the second part in the trilogy, is in post-production, and eyeing 2017 worldwide release. The film is being co-sold by Disrupting Influence’s Glenn Kendrick Ackermann & Jason Piette and Atlas International Film’s Michel J. Vandewalle, both present at Cannes Film Festival.

Iron Sky the original film premiered in 2012. It’s is a dark science fiction comedy that takes place in the year 2018, when the Nazis, who fled the Earth to the dark side of the Moon in 1945, return to claim the Earth. 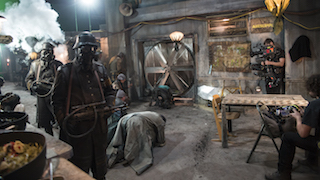 The filmmakers have experimented with fan collaboration for more than a decade now, starting with their first film Star Wreck (2005) and widening the concept with Iron Sky (2012) and the sequel Iron Sky The Coming Race (2017). Fans have collaborated with the sequel as extras as well as giving direct script feedback and comments on the film's early roughcut in test screenings in Helsinki and Berlin.

The first stage of the Fanchise initiative is the open call, which is open on May 14th 2016 to the end of January 2017 at www.ironsky.net/fanchise The best pitches will be chosen and developed further.

To celebrate the launch, the filmmakers threw a party at the Cannes International Film Festival in France on May 14th. The whole Iron Sky fan base was invited to the party, alongside with a selected people from the international film community.

The film was completed in February 2012 and released at Berlinale 2012 in Panorama program.

Iron Sky Universe is a production company is owned by Tero Kaukomaa and Timo Vuorensola from Finland, plus more than 500 shareholders from more than 30 countries, who brought in more than $330 000 dollars in exchange for roughly 10 percent of the company during the first crowd funding round in May 2014.