When I discovered that my long-time friend Bob Gibbons has been writing movie reviews for many years, I asked if he would write about films for Digital Cinema Report and he agreed. He has long worked in the motion picture industry, mainly at Kodak and later at Panavision, and one constant in his career has been a passion for movies of all kinds. And he sees a lot of movies. That passion shines through in all his reviews of movies good and bad and we’re pleased and proud to be sharing them with you starting with this Report. Here are some of his thoughts about movies and movie criticism. 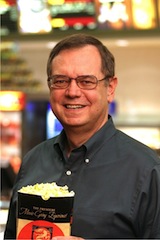 Digital Cinema Report: How long have you been writing reviews?

Bob Gibbons:  About fifteen years, maybe more.  I spent more than forty years working for Kodak, much of that handling marketing and communications in Hollywood, so I have a shaky grasp of time and, some days, reality.  I started them because of a request from a friend who said:  “We have young children.  My husband and I can’t waste our money on bad movies.  You see a lot of movies, tell us which ones are worth seeing.”  And so, I started writing down my thoughts on every movie I saw and sending them out to a list that’s grown substantially over the years.  Some of those people may not really like movies, they might just be lonely.

DCR: What makes you think you can recognize good movies from bad?

BG:  I see more than 100 movies a year, always in theatres.  I try to see a cross section of movies -- with the exception of 'slasher flicks' -- so people are sometimes surprised -- or even appalled -- by what I see.  I love movies and see most genres -- including 'chick flicks' which sometimes have more emotional content.  Of course, most times, they’re just predictably awful.

DCR: So what can we expect of your reviews?

BG:  They’ll be short – but I will try to tell you enough about the movie so you can decide if you’d like it – but not so much that it will spoil anything for you.  I won’t reveal surprises or the ending; usually the trailer takes care of all that.  And, I’ll write them as I see the movies – so, some weeks there may be several reviews, other weeks, not so many.

BG:  To help you figure that out, I thought I’d start this column with two sets of reviews – the first will be the ten or twelve movies I thought were the best of 2012 – and then the ones I thought were the worst.  These are all a bit shorter than the ones I’ll normally write, but they’ll give you a taste of what to expect.  You can see if your opinions align with mine, or not.  If you like what I hate – or vice versa -- well, that will be useful information for you to have, also.

DCR: What’s your purpose in writing these reviews?

BG:  I have a couple of goals.  First, I use them as an excuse to write something on a regular basis -- because I think the only way to get better at writing is to write a lot.  And second -- in sending them out to you, I’m hoping to draw your attention to some good movies you may not have heard of -- especially independent films that don't have a lot of promotional money because they spent it all on an actual script and a real talent.  I’d also like to keep you away from the absolute crap that is over produced and over-promoted -- and widely available.

DCR: What about feedback?

BG::  I used to be a corporate speechwriter, so I have no problem having my ego pounded flat.  I love and welcome feedback – good or bad – but I seldom get it, so if you’ve got some, send it along.  In fact, if there are any movies from the past several years where you’d like my opinion, just ask.  If I’ve seen the movie, I’ll send it along.