The Importance of Color in Comedy 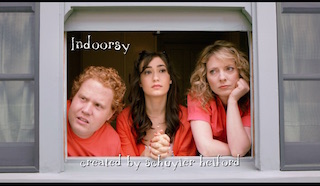 Created by Schuyler Helford a Los Angeles-based producer, writer and comedic actress (Anger Management, The Middle), the new web series Indoorsy is an original comedy about three agoraphobics who decide to move in together and open a day spa inside their apartment, appropriately called spa-partment. “I have learned that that color-correction is such a crucial part of setting the tone for the story, especially in comedy,” said Helford.

She chose AlphaDogs to complete post-production upon strong recommendation from the late John Fuller, who was the editor on the series. Veteran colorist and founder/CEO of AlphaDogs Terence Curren, worked one-on-one with Helford to not only set the look and tone of the story, but also troubleshoot problematic scenes including making a practical shower steam effect used in production look more realistic and brightening dimly lit shots.

“Terence worked magic with shots I thought couldn’t be fixed. When I sent him examples of how I wanted things to look, he nailed it!  Bright primary colors were used to match the broad, wacky comedy of the series. I don’t really get how he does it all, but like I said, it’s magic." 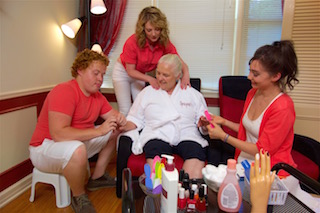 Helford’s character and her roommates all suffer from agoraphobia. Agoraphobia is defined as an extreme or irrational fear of crowded spaces or enclosed public areas. So what can an agoraphobic do to earn a living if they can’t possibly step foot even one-inch outside of their home?  Open a business inside an apartment of course, and bring the world (and money) to them!

The order-in lifestyle of today’s modern world served as inspiration to create Indoorsy. “With services like GrubHub, Amazon and Seamless I never have to leave my home,” said Helford. “I wanted to create a world of characters, who because of extreme circumstances, can’t leave their apartment, but are still trying desperately to bring the world to them.”

With humor being one of the best antidotes for the soul, Helford hopes that audiences will experience the gift of laugher while watching Indoorsy and perhaps learn a little about turning adversity into something positive.

“I would definitely recommend AlphaDogs to my friends and colleagues. The whole team provided a seamless process. It’s difficult to find a post-production company that puts as much care into a project as you have for yourself. AlphaDogs works with you to ensure you get what you came for.”

Watch the trailer at https://www.youtube.com/watch?v=WroA1lA6Ojo