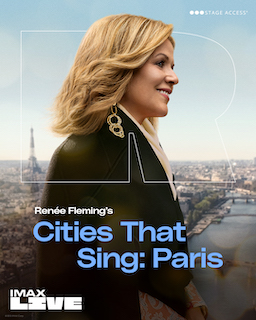 For the first time, Imax, opera, and the performing arts are coming together with Renée Fleming’s Cities That Sing – Paris, an Imax and Stage Access production that premieres September 18 with a special, one-day-only Imax Live conversation with the Grammy Award-winning soprano and Emmy Award-winning performer Kelsey Grammer.

“Imax is the perfect format for our one-of-a-kind film. It has the sheer scale to do justice to the expressive power of this art form,” said Fleming, the four-time Grammy Award-winning legend who is also the only classical performer ever to sing the National Anthem at the Super Bowl. “Opera is called grand opera for a reason: It’s larger than life. You’re incorporating every art – instrumental music, singing, drama, poetry – into one major art form: opera. It’s all there. So, what better way to see it, if you can’t see it live, or in addition to seeing it live, than on the largest screen possible?”

This groundbreaking cinematic event features a performance by Fleming at the historic Théâtre du Châtelet, where she is joined on stage by world-renowned tenor Piotr Beczala and featured performers Axelle Fanyo and Alexandre Duhamel as they perform opera selections with connections to Paris. Leading couterier Alexis Mabille and acclaimed director Robert Carsen also join Fleming in the film, which can only be experienced in Imax. 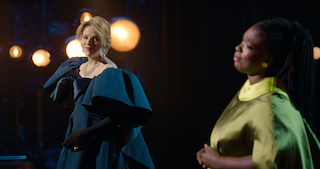 “Stage Access is honored to have been able to create this remarkable series, reinventing how classical music can be enjoyed and connected to culture in the most immersive of experiences with the incomparable Renée Fleming,” Lipnick said. “Fleming’s ability to connect with audience as both a performer and host is unmatched, along with the intimacy and scale of Imax.”

“It is more impressive watching these performances in an Imax theater than literally sitting on the stage, five feet from the singers – I know, because I was there,” adds Hornick.

The Imax Live presentation of Renée Fleming’s Cities That Sing – Paris can be seen in more than 100 Imax venues across the U.S. and in cities worldwide. Audience members will be given the opportunity to ask questions of Fleming. Attendees will also receive an exclusive digital program.

The Imax Live special presentation will be available in select Imax locations on September 18 only at 3:00 p.m. EDT and 12:00 p.m. PDT. Following the September 18 live performance, the film will be presented again without the live presentation in additional locations.

A complete list of participating Imax locations, which are subject to change, can be found on the Imax Live website http://tickets.imax.com.