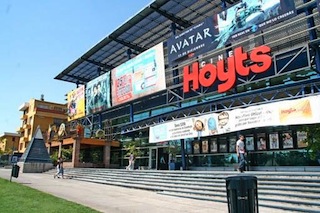 To carry out the digital theater conversion process, Hoyts Chile released a private technology tender in which it invited suppliers in the industry to bid. “In the end we chose Christie because their business proposal was the most complete, attractive and aggressive,” said Juan Carlos Arriagada Mons, general manager of Cinecolor Chile, Grupo Chilefilms division that provides technology services for all business units of the group.

“Christie knew how to interpret our planning, appreciated our apprehension with technological changes and financing needs and they pledged their commitment to a close, long-term relationship. Their offer was not limited to supplying projection equipment only, but they also guaranteed immediate access to spare parts, lamps, new technologies and financing in a long-term contract,” said Arriagada Mons.

Hoyts Chile has a long business relationship with Christie. In fact, in mid-June of 2012, the color correction/projection theaters of Cinecolor –the post-production division for images, sound and cinematographic laboratory of Grupo Chilefilms with presence in Mexico, Colombia, Brazil, Argentina and Chile – was equipped with Christie CP2220 projectors.

Craig Sholder, vice president, entertainment solutions at Christie said, “We are delighted that Hoyts Chile has once again put their trust in our projectors for their digital theater roll out, which is proof of the confidence and respect that theater professionals have for Christie. Today the digital cinema projectors that Christie manufactures have the largest worldwide market share because exhibitors recognize that our projectors, in addition to having exceptional image quality, offer the best light efficiency and the lowest operating costs”.

Christie will supply Hoyts Chile with a variety of DLP Cinema projectors, such as Christie CP2215, Christie CP2220 and Christie CP2230, as well as the Christie Avias-TMS Theatre Management System, which allows the screen operators to centrally control and organize all projection operations from a multi-screen theater.

Furthermore, Hoyts Chile will equip three of their theaters with the innovative Christie Vive Audio cinema sound solution, which they will use along with a leading immersive audio platform, Dolby Atmos.

“Christie invited us to several demonstrations of the Vive Audio technology, where we were able to witness and systematically measure the extraordinary distribution of the sound pressure throughout the audience, which substantially improves the intelligibility of the dialogue (with respect to cone-based speaker systems) and the uniform distribution of sound in the theater, greatly decreasing the rebounding that causes interference,” said Arriagada Mons.

Hoyts Chile’s roll out, which will take place through a virtual print fee agreement with GDC Technology, began in January and is expected to be completed by November of this year, including the digitalization by Christie of the new theaters that Hoyts Chile plans on opening in 2015 and 2016, which could number as many as 30 screens.