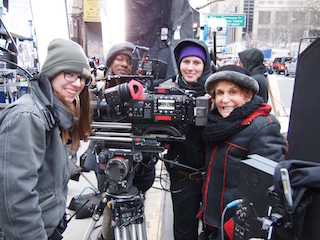 She shot the PSA with a pair of Panasonic VariCam 35 cinema camera/recorders. The spot was produced by Portal-A and directed by Suzi Yoonessi. The VariCam 35s for the one-day production were rented from Technological Cinevideo Services, New York, NY. Director of Photography Schreiber said her choice of the Panasonic 4K camera/recorder was based on her long association with and appreciation of Panasonic cinema cameras and their color science.

She had also previously used the VariCam 35 shooting night exteriors for an upcoming feature, Folk Hero & Funny Guy. “We needed to shoot at night with available light, and the camera’s ISO5000 setting was so clean and totally amazing,” Schreiber said. Folk Hero & Funny Guy premieres in competition at the Tribeca Film Festival in April 2016.

The YouTube PSA was shot on location in New York City in February, with the shoot split between studio interviews with the seven women and day exteriors.

“We did some critical shooting at the High Line in Manhattan, where we were restricted to battery operation and minimal lighting,” Schreiber said. “For those conditions, I wanted to be able to deploy the VariCam 35’s ISO5000 setting, which really enabled us to shoot anywhere throughout the elevated public park.”

“Beyond the camera’s extreme low-light capabilities, I find the VariCam 35 to be versatile and very ergonomic, fitting nicely on my shoulder, more so than comparable cameras,” she continued. “The color is just fantastic right out of the box, the menus are intuitive, the removable control panel is a real asset, and the camera is terrific for post.”

Schreiber said that she shot native 4K, with simultaneous sub-recording of 2K proxies, which were immediately sent to editing and later matched back to the 4K original. The edit was done in Adobe Premiere. “I’m looking forward to using the VariCam 35 and the new VariCam LT together on a longer shoot,” she added.

Schreiber, based both in New York and Los Angeles, was only the fourth woman voted into the American Society of Cinematographers. She is a longstanding user of Panasonic cinema cameras. She shot the feature November, for which she received the Best Dramatic Cinematography Award/2004 at Sundance, with the AG-DVX100. She had also worked extensively with prior generations of VariCam cameras.

In addition to her November honors, she shared a second Best Cinematograph Award at Sundance for My America…Or Honk If You Love Buddah. She has received nominations for Emmy and Independent Spirt Awards. She has two films currently in post-production, Folk Hero & Funny Guy and Kepler’s Dream, and she served as DP for several episodes of The Family, which premiered on ABC on March 3. She is currently in production on the new FX series Better Things, produced and co-written by Louis C. K.