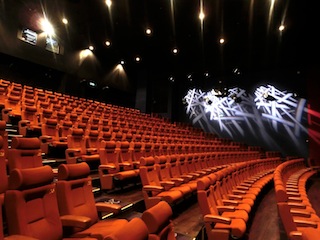 The Grand, the largest multiplex cinema in Hong Kong, is installing a Sony 4K Twin Peak projection system in its largest auditorium.

Operated by Shaw Group, a joint venture project between Shaw Group and Multiplex Cinema, The Grand features 12 screens, a seating capacity of close to 1,600, and continues to be one of the top-grossing theatres in Hong Kong. The installation of Sony’s 4K Twin Peak system in The Grand’s largest auditorium is expected to be completed this month, and would make The Grand the first cinema in Hong Kong to be installed with this true Sony 4K/3D system.

Sony’s 4K Twin Peak system consists of two units of Sony’s SRX-R320 4K digital cinema projectors. For 3D screenings, full 4K resolution is possible for the left and right eyes simultaneously due to the use of two 4K projectors, resulting in a high-brightness, high-quality stereoscopic cinema presentation that offers more faithful reproduction of motion in 3D.

The system achieves a 3D brightness of 6ftl (higher than the industry standard of 4.5ftl recommended by DCI) and supports Dolby Atmos.

In late 2010, The Grand embarked on an upgrade of its 35mm projection systems to Sony’s SRX-R320 4K digital cinema projectors. This was completed by 2011, with all 12 theatres equipped with Sony’s SRX-R320 and 7 being 3D-capable now. 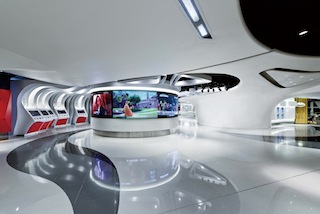 Within the last few weeks, The Grand has also procured a unit of Sony’s latest SRX-R515P 4K digital cinema projection system designed for small-to-medium auditoriums. The high quality system employs innovative technology where the projector will continue to work even if one of the lamps fail, minimizing the chances for any downtime. The lamps also feature prolonged life spans for lower total running costs for cinema operators. The SRX-R515P offers true 4K quality from the integrated media block through the lens to the cinema screen, and features an improved SXRD optical engine, 8,000:1 contrast ratio, 15,000 lumens brightness, easy-on-the-eye Sony 3D and high frame rate capabilities.

In late 2010, The Grand embarked on an upgrade of its 35mm projection systems to Sony’s SRX-R320 4K digital cinema projectors. This was completed by 2011, with all 12 theatres equipped with Sony’s SRX-R320 and 7 being 3D-capable now. Back then, there were limited product offerings for 4K, and The Grand’s management felt that the capabilities of Sony’s SRX-R320 to upscale and project sharper, higher-resolution images from 2K files were unrivalled. They were also looking for reliability, as no theatre would be able to tolerate any downtime and subsequent loss of revenue and reputation.

“The reasons we chose Sony are quite simple – quality and reliability. We have seen demonstrations from different vendors, but at the end of the day, only Sony’s 4K digital projectors deliver the sharpest images with unmatched color intensity and contrast,” said Wendy Nam, consultant of The Grand.

“The Grand has always strived to remain at the forefront of cinema technologies, and we’re delighted that they have again chosen to use Sony’s 4K digital cinema systems due to their positive experiences with our equipment and services. All cinema patrons in Hong Kong can look forward to an enhanced and unprecedented movie-going experience at The Grand,” said Tadahiro Fukumoto, general manager, visual presentation solutions division, professional solutions company, Sony Electronics Asia Pacific.