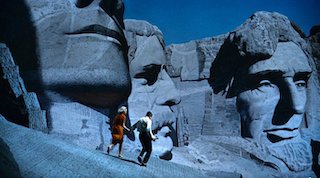 Art of the Hollywood Backdrop: Cinema’s Creative Legacy opens April 20th at the Boca Raton Museum of Art in Boca Raton, Florida. The exhibit honors the unsung heroes who created these monumental canvases for the camera, going back almost 100 years. These artists were the backbone of the film industry. This is the first museum show dedicated to Hollywood’s painted backdrops, the grandest illusions ever created for the movies. These rarely seen masterpieces were never meant to be viewed by the public this way. They were kept secret by the Hollywood studios, meant only for the eye of the camera lens.

The exhibition was originated by the Boca Raton Museum of Art and is co-curated by Thomas A. Walsh and Karen L. Maness, who played pivotal roles among a group of passionate Hollywood insiders to salvage these American treasures.

The result in the museum’s galleries is a magical portal that takes the terms large-scale, immersive, and virtual reality to a whole new level. This exhibition of 22 scenic backdrops, made for the movies between 1938 and 1968, celebrates an art form nearly forgotten. 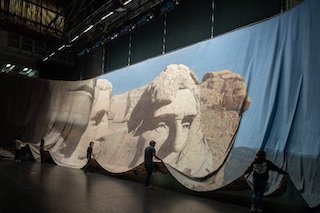 This is a well-deserved moment in the spotlight for the dozens of unidentified studio artists. Their uncredited craftsmanship made scenes of Mount Rushmore, Ben-Hur's Rome, the Von Trapp Family's Austrian Alps, and enabled Gene Kelly to dance on a Paris street. The show’s immersive components include interactive video reels created in Hollywood specifically for this exhibition, telling the stories behind each backdrop.

Soundscapes have been engineered to surround visitors in the museum, including atmospheric sound effects related to the original movies, and to the scenic vistas. 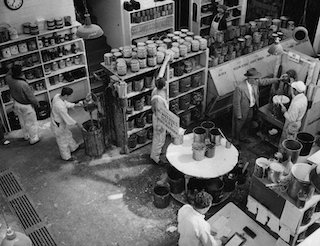 Irvin Lippman, the executive director of the Boca Raton Museum of Art said, “It is miraculous that these historic monumental paintings were not lost forever, as so many Hollywood treasures have disappeared. The concept for this show had its genesis with a CBS Sunday Morning segment that called attention to the campaign to preserve scenic backdrops that had laid rolled up in the basement of MGM's studios. Lynne Coakley, Karen L. Maness, and Thomas A. Walsh have played a significant role in preserving this inventory from Hollywood's golden age. Their vision and partnership with the Boca Raton Museum of Art made this exhibition possible.”

Coakley heads J.C. Backings Corporation, which acquired more than two thousand backdrops from MGM storage in the 1970s. In 2012, The Art Directors Guild Archives, then under the direction of Walsh who was the Guild's president, launched the Backdrop Recovery Project, a partnership with J.C. Backings. Their goal was to preserve the backings and make them available for study. One of the recipients of this cache of gigantic paintings was Maness, who is a University of Texas at Austin and Associate Professor of Practice. 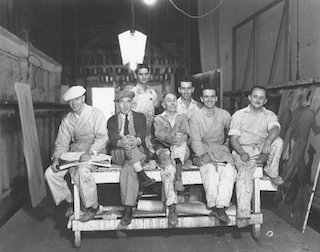 She saw the opportunity to use the artifacts as part of a learning laboratory where students could use them for visualization and inspiration to succeed in high-realism scenic painting.

With Walsh and Maness agreeing to be the co-curators of this first major exhibition of the Art of the Hollywood Backdrop, the Museum project began to take shape. They accepted Lippman’s invitation to visit the Boca Raton Museum of Art in the fall of 2021.

Twenty backdrops, including the famous Mount Rushmore, are being loaned by the Texas Performing Arts Hollywood Backdrop Collection at the University of Texas. In addition, a 1952 backdrop for Singin' in the Rain and the tapestry backdrop for Marie Antoinette (1938) are on loan from the Motion Picture Academy in Los Angeles.

Donald O'Connor danced his brilliant comic performance of Make' Em Laugh in front of the backdrop from Singin' in the Rain. The 1938 tapestry backdrop interestingly was reused in the North by Northwest (1959) auction house scene, a relatively common practice in the film and television industry of the time.

One scenic backdrop is from the 1959 MGM film North by Northwest. Produced and directed by Alfred Hitchcock, the film starred Cary Grant and Eva Marie Saint. “This is the grandaddy, the Babe Ruth of all Hollywood backdrops,” said Maness. “Especially because it was such a key player in the telling of this story.” 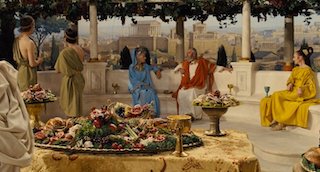 The backdrop is part of Texas Performing Arts' permanent backdrop collection, the most extensive educational collection of Hollywood Motion Picture backdrops in the world. Maness also conducted extensive oral history interviews with the last surviving artists, their family members, and their acolytes, to record and preserve their previously unacknowledged histories.

“It was essential to capture these artist’s stories before they disappeared,” said Maness. Some of these artists came from a family tradition of the craft, with lineages spanning three generations of painters. The craft stayed within the family.

Most were trained as professional artists, yet they remained uncredited, sometimes because of union agreements, and mainly because the studios wanted to keep a firm grip on the secret techniques that were handed down from master to apprentice on the backlots. 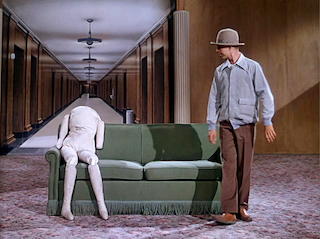 The physicality of painting across these giant canvases was often overwhelmingly difficult. Some artists even suffered tragic consequences in the early years of this craft, before the studios developed more sophisticated working platforms: Coakley’s father fell to his death from a perilously high scaffold while painting a backdrop. “This has become my passion project, to tell their stories. I will be their champion in this lifetime,” said Maness.

“Historically, as a woman I would have never been allowed to work alongside them in that era. As a teacher, they have now become my masters. When you choose your mentors as ghosts, they can’t say no,” added Maness. These creations were painted for the camera lens itself, not for the human eye. It is a very impressionistic style of painting; not really photo-realism, but it snaps together as photo-realistic when viewed from a distance.

Up close they look totally different. When visitors to the Museum take selfies with their phone cameras, the resulting image will look very different from what they see in person in the gallery. This unique concept of photo-realism for the camera was spearheaded by George Gibson, he took scenic art to an entirely new level of artistry. In the hey-day of MGM, they had three shifts of scenic artists working day and night, non-stop. 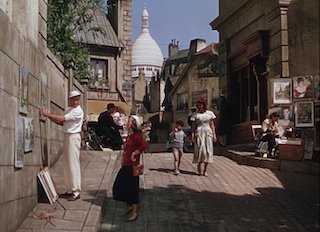 “This show is about the joy of re-living something you grew up with, that you always thought was real. It’s about getting as close to that magical moment in time as you can. Being in the same space with that giant, familiar scene. It is difficult for people to get their minds around the awesome size of these magical spaces, until they see them in person. People are often shocked and surprised by the scale and visual impact of these massive creations," said Walsh.

"These are literally some of the largest paintings ever created in the world, similar to cyclorama paintings. Aside from the technicians working in the soundstages, no one else has set eyes upon this collection. This is the first time the public can see this collection in person,” added Walsh.

Throughout his career, Walsh has been a mentor to many young designers. “After the digital/synthetic revolution took over filmmaking, the young designers today who are most successful in the computerized realm are those who continue to hone their real-life painting and drawing skills," said Walsh.

"They know about perspective and really understand art, nature, light, and architecture. They can still be tactile. The idea that you can still get personal and dirty with your art is a revelation to many of the current generation. Those who do, are better at their computer arts," added Walsh 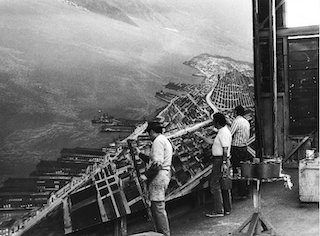 Walsh was born into a Hollywood show business family. His father, Arthur Walsh, was a contract actor and jitterbug champion at MGM Studios in the 1940s and went on to have a successful solo career as a nightclub comedian.

It was through exposure to his father's world of live performance that Walsh began his lifelong journey in the film and performing arts. Walsh attended Hollywood High School, and starting at the age of 17, Walsh served as an apprentice to some of these Hollywood scenic artists.

Today, Walsh is a leading production designer in the entertainment industry. He was president of the Art Director’s Guild when this recovery project started, and it was his vision to make sure his Guild’s members were seen and recorded.

“Credit went to everyone in these classic films except the scenic artists who made these cinematic moments possible by creating the backdrops,” said Lippman. “The heroic efforts by these preservationists to recover the singular artistic knowledge of these masters is the heartbeat that underlies this exhibition at our museum. Hollywood’s most closely guarded creative secrets can finally be revealed through this never-before-seen exhibition that we are proud to debut here in South Florida.”

The show also features an Education Gallery created especially for this exhibition, showcasing historic tools of the trade used by these artists in Hollywood.

One of the most memorable experiences for visitors to the Museum will be the opportunity to see up close the actual brushstrokes and dynamic hand-painted techniques that were used by these artists, to create the necessary effects they developed for the camera lens.

“In this form of painting, the deadlines and physicality required speed and confidence. The canvas was attacked with wild abandon, not courted,” said Walsh. “Their unique industrial techniques permitted them to be Norman Rockwell at one moment, and then Turner, Rembrandt or Vermeer at another." As artists, they made motion picture artworks whether with brush, roller and sponge, spray guns and Hudson tanks, brooms, or just sheer tactile-aggression on a massive Ford‘s River Rouge type of industrial scale and output schedule.

”Bold, efficient brushstrokes pull forms into a loose realism that breathes with the energy of the artists who laid the marks on the canvas,” said Maness. “These monumental witnesses to cinematic history vibrate with impressionistic optical blending techniques, applied with pneumatic guns, to deliver fine points of color that pull together and hold up as realism for the camera’s eye.”