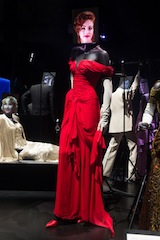 Arri is proud to support the Academy of Motion Picture Arts and Sciences' groundbreaking multimedia exhibition Hollywood Costume in Los Angeles with over 25 L-Series LED Fresnels. Curated by costume designer Deborah Nadoolman Landis, the show takes visitors on a journey that tells the story of costume design from early Charlie Chaplin to Man of Steel. Lighting Designer Trevor Stirlin Burk was tapped to enhance the exhibition by illuminating the costumes and environment. Watch this video for an exclusive look at Hollywood Costume and listen to Burk explain how it was lit with the Arri L-Series.

"One of the coolest parts to me about the exhibit is that Deborah put these characters in motion and in action. We’re teaching and talking about how that process works, how collaboration works," notes Burk.

Over 170 costumes are on display, including Jared Leto’s outfit from Dallas Buyers Club as well as costumes from such recent releases as The Hunger Games, Django Unchained, American Hustle and The Great Gatsby.

In addition, Hollywood Costume showcases the Academy's pair of the most famous shoes in the world – the original ruby slippers from The Wizard of Oz.

"The color replication in the L-Series was really what drew me to fixture," says Burk. "I knew we were going to do isolated lighting on all of the various pieces and we were telling stories that were grouped together by location, or film genre, or designer. I wanted something that was big, soft and beautiful color that would tie everything together. In a plinth if we’re telling five or six different stories, I could use the color from the L-Series to unify that idea."

Hollywood Costume includes animation, film clips, and projections supported by a commissioned score from composer Julian Scott. Clothes are exhibited alongside quotes and interviews with costume designers, directors, and actors discussing the role that costume plays in creating the characters on screen.

Burk appreciated the durability, consistency and low power consumption offered by the lights. "I think we came in around 60-90 amps for the entire thing. That was hugely helpful. The blue we dialed in will be the exact same blue in six months. It’s going to run eight hours a day, every day and it’s going to be exactly what it was."

Overall Burk is content with his work and how the L-Series were implemented. "…I wasn’t going to sacrifice the purity of the shadows, I wasn’t going to use something where I couldn’t control the light and it was going it spray all over. I wasn’t going to put anything that could burn out. It was going to be 100 percent LED, no matter what. With all of those things, there weren’t any other options. It was [L-Series] or nothing."