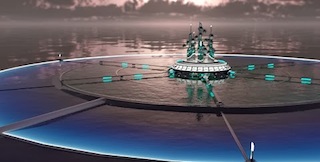 Kevin Xu, CEO of Mebo International believes he has come up with a novel way to introduce audience to the achievements of organ regeneration science. Visitors to the California-based company’s campus website (www.regeneration2013.com) find themselves in a computer-generated floating city that’s home to a towering library, a giant rotating sphere and other iconic wonders. Visitors can choose to tour the city on foot or from the seat of a translucent shuttlecraft while a narrator describes “a revolution in science that will change our lives.”

Mebo Campus is the work of Hoax Films, a Los Angeles digital production studio. Although the studio is best known for its work in traditional media such as advertising, music videos, television and film, the company has been seeking opportunities to broaden its scope. “The media landscape has changed radically over the past three years,” says Alexis Nelson, the company’s co-founder and executive producer. “We are particularly excited about the potential of the web where increased broadband access and developing web technologies have made it possible to create and deliver high quality animation. A site like Mebo Campus wouldn’t have been possible even a few years ago.”

Creative Director Rick Sander says the site provides a startling contrast to websites for other companies involved in medical research, which tend to be heavily laden with arcane scientific information. Instead, Mebo Campus is experiential in nature. “It’s like a ride film,” Sander explains. “Viewers soar past and through buildings, each of which represents a different aspect of the company: its philosophy, exclusive science, mission, history, future and so on.”

Mebo International is focused on managing intellectual properties of organ regeneration science related to the work of its founder, Dr. Rongxiang Xu, educate people all over the world. The aim of the website, therefore, is to educate audience about organ regeneration science. “They want to prepare people for the future,” observes Conceptual Designer R. Douglas Nelson. “They want to build awareness of the scientific breakthroughs that have already had a significant impact on 70-plus countries and are coming here very soon.”

Nelson, whose past work includes The World of Caesar for Caesar’s Palace in Las Vegas and a fantasy-inspired Fairyland retail environment for Tokyo’s Sanrio Gallery, says that Mebo Campus was influenced by visionary architecture, including Paolo Soleri’s famous Arcosanti project.

“Our Mebo clients liked the images we showed them of Arcosanti and other examples of futuristic architecture,” Nelson recalls. “That led us to create a floating arcology, a city in the middle of the ocean. It moves, it has the ability to be in different locations at different times to best tell the story. Cellular structures are another important part of the design style. You see it reflected throughout the project, and that relates back to the company’s mission in regeneration science.” 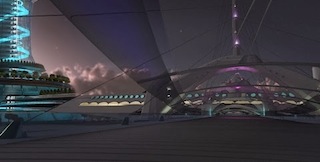 Mebo Campus is designed to evolve and grow. “Currently, it’s like a new shopping mall – under construction – that’s waiting to be filled with shops and customers; we’re only beginning to add the buildings and attractions,” Nelson says. “One area will deal with communication. It will be a museum of sorts. There will be another area for science and another for applied science. It’s a little like Disney’s Epcot with different themed areas.”

Nelson calls the community “a special kind of hybrid,” incorporating corporate, academic and applied scientific elements into a “world’s fair” environment. It will ultimately include transportation hubs, methods of traveling to and from, and other infrastructure. “Although virtual, we are treating this as a real world,” he explains. “Many people ask me if this project is actually being built.”

Currently, guests receive a quick visual tour of the mother ship. They can fly around and above it and walk about the decks, previewing what will become a special place of learning, discovery and hope—a place where regeneration offers promise of a new and better world. Greater interactivity is planned. Users will be able to choose between a variety of different experiences and lessons, and travel to new destinations.

“The development of the site is very collaborative,” adds Sander. “We have an ongoing conversation with Kevin where we discuss the best ways to show off the work they are doing. Eventually all of the buildings will be filled with exhibits.”

A different section of the website features a live action video that delves more deeply into the regeneration science behind Mebo, but again the approach is metaphorical rather than overt. People wander through chaparral covered hills and gaze at floating images of regenerated organs. Wrinkles fade from their faces.

“The scale and imagination on this project was unprecedented,” cites Executive Producer Gene Ferriter, who has been involved in the conception, design and development of website projects for 14 years. “Future web historians may well cite the Mebo Campus as the turning point for seamless integration of 3D modeling, film and web design, all in the interest of edifying the public. It may also be the first website in history to feature its own movie style credits.”

Hoax Films, which produced all of the 3D animation, visual effects and live action video, has won a slew of awards for Mebo Campus, including six W3 Awards, two of which were Gold (for Animation and Video or Motion Graphics).

Sander believes that the site’s innovative use of 3D animation and other entertaining content can serve as a model for companies seeking to engage with consumers more deeply. “The next generation of website design is going to include a lot more rich content, including movies, interactive adventures and ride film-style experiences,” he says. “Most sites today, whether they’re for a car company, an agency or an accounting firm, feature the same type of content. What we’re doing is showing all of those things, plus a lot of extra content that only a VFX company can produce.”