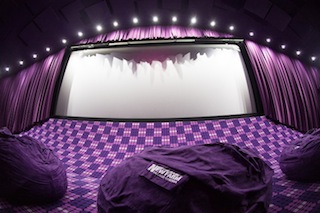 Christie Solaria Series projectors and Christie Vive Audio cinema systems have been installed in a newly opened cineplex located in New Farm, a trendy inner-city suburb of Brisbane. Known as New Farm Cinemas, the complex houses six auditoriums that are color-themed with each theater catered for different purposes and clientele.

Meticulously rebuilt over a period of 18 months on the site of a former two-screen cinema known as the Village Twin, the 205-seat Purple Room and the premium Bronze Room with 70 seats are to open to the public on August 1. In particular, the Purple Room is the first theater in Australia to be furnished with Christie Vive Audio. The installation was undertaken by Christie and its Australian partner Edge Digital Technology.

“We applaud New Farm Cinemas for their decision to install Christie’s projection technologies and Christie Vive Audio solution in their refurbished auditoriums situated at this historically and culturally iconic location in Brisbane,” said Lin Yu, vice president, Christie Asia Pacific. “We believe that the performance of our projection and line array speaker technologies provides a great visual and audio experience to every movie-goer and makes New Farm Cinemas one of the hottest destinations in the city.”

The Purple Room uses Christie Vive Audio speakers of varying combinations, including LA1 screen channel speakers, S215 subwoofers (for full range frequency response), S218 for Low Frequency Effects (subwoofers) channels, as well as LA1 and S115 for corner surrounds. Unlike most global Vive Audio installs to date, where surround speakers are mounted on the wall of the auditorium, a corner surround system is specially-designed for the Purple Room as its ceiling has been accorded local and state heritage protection due to its significance as an ongoing cinema since the 1920s.

“We are committed in providing our patrons with the best movie-viewing experience by investing in the finest technologies such as Christie’s cinema technologies and equipping our theatres with the most modern facilities at this landmark cinema complex on Brunswick Street,” said Peter Sourris, owner of New Farm Cinemas. “On top of that, we want to extend the experience beyond just watching a film. It’s actually going to be a pretty trendy place to visit, even if you’re not watching a movie. People will come here just for a cocktail. It’ll be like a slice of Hollywood, in Brisbane.”

Boasting retro carpets, bean bags at the front of each auditorium for couples, arcade games and vintage film memorabilia, New Farm Cinemas is a unique, boutique-style theatre complex that pays homage to the golden age of cinema. Originally constructed in 1921 as the open-air Merthyr Picture Palace, the cinema was remodeled in the 1930s to become the Astor, before transforming into the Village Twin in 1970. The site, bought over by the Sourris brothers in 2013 and rebuilt into a modern 535-seat cineplex, is poised to revitalize this landmark site and turn it into an epicenter of social activity and pop culture. The cinema’s second phase including two Gold Rooms and four extra screens, is currently under construction and is set to open later this year.