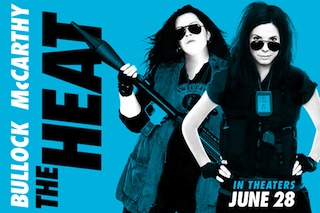 If you’re not laughing out loud and often, you are simply not paying attention.  This is a movie that’s “politically incorrect” in every way, but oh, it’s just so funny. And yeah, I know Melissa McCarthy is basically playing the role she often plays, the slightly over-sexed and out-of-control loony but she plays it better – and bigger – here.  And while Sandra Bullock seems to be overacting a bit especially in the beginning, as soon as you recognize that’s coming from the two-by-four she’s jammed up her rear end so she can get promoted, you just go with the flow.

They’re the odd couple and odd has never been so outrageous, outlandish, and just plain out there.  There is a plot in here, but it’s lame, weak, and predictable; its only real purpose is to keep everything from happening at once – and to lay out a series of situations where Bullock can be awkward and arrogant – and McCarthy can be crude and confident – and the women can both bond and battle each other over their differences.  Some scenes play too long and seem to have been included just for comic effect. But, as the women get to know each other, there’s even a bit of heart.  Best of all, it ends with a sequence involving a cat.  Let’s be clear:  if it takes a little – or even a lot – to offend you, you will be offended.  Repeatedly.  Get over it because if you love to laugh, this is the movie you've been waiting for all summer.