The Polynesian Cultural Center in Laie, Hawaii celebrated its 50th anniversary with an upgrade that features a new digital 4D theatre. Set on 42 acres on the North Shore of Oahu, the PCC enables visitors to explore all of the Polynesian cultures in the South Pacific. Since opening, the PCC has welcomed more than 37 million guests, becoming Hawaii’s number-one paid attraction.

Although the IMAX theatre and its Polynesian Odyssey film served PCC well, it had become apparent that the center needed something new and different to help overall efforts to grow attendance and make better use of the facility for alternative purposes.

The exterior of the new 4D digital theater was transformed by Michael Lee Design of Orem, Utah (MLD), from a gray box that had nothing Polynesian about it into an ancient volcano whose visuals – including volcanic vents that exhale “steam” from deep below the surface – blend in with PCC’s natural, tropical surroundings.

MLD also converted the interior, leading guests through dark and glowing “lava tubes” where guests see flame-effects lighting and hear the sound of the ocean coursing through rock fissures. Upon entering the theater, black-light illumination and artwork create the impression of being inside a large volcanic chamber. Once guests are seated, the new 14-minute production, Hawaiian Journey, takes them on a breathtaking flight through the islands as they explore the spectacular beauty of Hawaii through the eyes of the first Hawaiians. 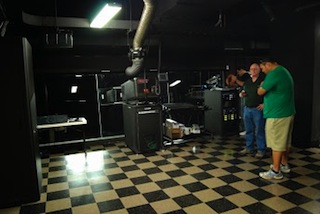 Electrosonic installed a new digital AV system, including a Christie 4K projector, 7thSense 4K media server and Strong/MDI 40x74-foot projection screen. “Converting to digital 4K projection offers numerous advantages over the former IMAX 15/70 film system,” said Electrosonic project manager Guy Fronte. “The cost of maintaining the film-based system – the price of lamps for the 15,000-watt projector, the IMAX maintenance agreement and the high fees for shipping and replacing the films – was excessive. The Christie digital system is more economical and efficient. It has no significant operational costs other than lamp replacement, and it doesn’t require a projectionist.”

Technifex of Valencia, California, designed the 252 motion-base seats from the ground up to fit into the rake and rise of the former IMAX theatre. The new high-back, special-effects seating was custom engineered with forward and backward motion, two headrest speakers in each seat, additional low-end speakers for vibration sensations, and water mist and scent spray effects. Six subwoofer speakers in the theater generate sounds down to 2Hz to create realistic rumblings evocative of an erupting volcano.

One of PCC’s goals was for the theater to serve as a true multi-purpose facility. To achieve that end, the MLD team filled in the screen pit and built a stage platform in front of the screen. A stage door was added for quick load in/load out and as an entrance/exit for performers. Electrosonic installed AV system connections to accommodate a presenter on stage giving PowerPoint presentations from a laptop or iPad projected through the Christie projector. A black curtain in front of the projection screen can be opened to the appropriate width for each media source.

With its transformation complete, PCC’s digital 4D theater is enticing crowds to take an exciting new Hawaiian Journey and is fulfilling the center’s need to repurpose the space for conferences and special events.