Harmony Coming to Screens in May 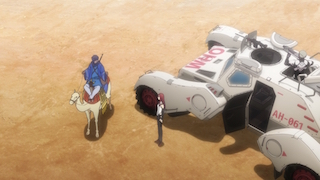 On the heels of this week’s limited theatrical engagement of The Empire of Corpses, Funimation Films has announced that advance tickets are now available for the movie Harmony, the second in the series of three animated films adapted from Project Itoh's novels. The film, produced by award-winning Studio 4°C, is co-directed by the duo of Michael Arias and Takashi Nakamura. Presented in both Japanese with English subtitles and English dub versions, Harmony will screen in more than 60 theaters across the United States on May 17 and 18.

"If response to the first film is any indication, fans will truly enjoy Harmony," said Gen Fukunaga, founder and CEO of Funimation. "Project Itoh's Harmony will transport moviegoers on an epic science fiction voyage – to a world, once ravaged by war and disease, that has been transformed to 'perfection' by nanotechnology."

To coincide with today's ticket sales announcement, Funimation Films also released the full-length theatrical trailer for Harmony. The trailer is available here for viewing through an exclusive partnership with IGN.com, the top gaming and entertainment website.

"Fans will not want to miss the futuristic world that Studio 4°C has brought to life in 'Harmony,'" said Mike DuBoise, executive vice president and COO of Funimation. "Whether anime or sci-fi fan, there are options for both subtitled and dubbed versions of the film, and we encourage everyone to purchase advance tickets to this limited, two-day release."

Harmony was the second novel by Japanese science fiction writer Project Itoh, pseudonym of Satoshi Ito, who died at the early age of 34 from cancer. Published in 2009, the novel was very well received by readers and was awarded the coveted Japanese Science Fiction Grand Prize, which recognizes the best in science fiction works spanning novels, movies, animation and manga. The novel was also nominated for the Philip K. Dick Award for distinguished science fiction in 2010.

Harmony producer Studio 4°C has been producing films, OVAs and shorts for more than 30 years. The animation studio is most well-known for its 2006 release "Tekkon Kinkreet," which received numerous awards around the globe including the Japanese Academy Prize for Animation of the Year and Best Animated Film at Fantasia, both in 2007.

Harmony co-directors Michael Arias and Takashi Nakamura are well known in their own rights as well. U.S.-born Arias rose to prominence as the first non-Japanese director of a major anime film with Tekkon Kinkreet. Nakamura has animated or directed more than a dozen films during his career, including the cult classic Akira – one of the most well known anime films of all time.

In a future ruled by an unwavering dedication to good health, three high school girls led by the defiant Miach Mihie attempt suicide as the ultimate act of rebellion. Tuan Kirie survives, but can't shake the hatred she has for the "perfect world" she lives in.

Years later, a simultaneous mass suicide rocks the globe and sends society into a state of shock. A small group stands up to take credit for the event, claiming they've hijacked the consciousness of every person on the planet. Everything about the terrorists' message sounds too familiar to Tuan. She suspects her old friend Miach might be involved, but how could that be when she'd supposedly killed herself years earlier? Desperate for answers, Tuan launches an investigation that takes her across the globe chasing the ghost of her old friend. But what is Miach's end game? Will she finally wake the world from its monotonous slumber? Or, end it all for good?