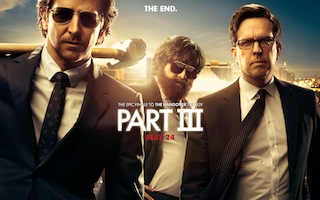 The franchise started with such promise: a fresh idea, lots of laughs, and almost $500 million at the box office.  Part II served up refried ideas, fewer laughs, but enough revenue to make Part III a certainty.  Now, the trilogy concludes with a movie that can’t decide what it wants to be: a buddy comedy, a dark crime caper, a road-trip, a chase epic? Maybe Three Men and a Psycho?  The only thing we know for sure is – the party’s over and it ended not with a bang, but a fizzle. Those who’ll enjoy this movie most will most likely be those who just want to see the Wolfpack back together and, like its members, want to continue the “good times.”  There are few good times – and even fewer laughs – in here. This is going to have to make its money from those who don’t expect much.  But, make no mistake there are rabid fans out there. In the screening I saw, some audience members began laughing over the opening corporate logo for Warner Bros. But those same people left their seats to get snacks during the movie and at the end, simply walked out of the theatre without cheers or emotion. They knew they had just watched almost 100 minutes of scenes that were too talky, too lazily thought-out, and played by actors on auto-pilot.  One good, fresh idea has been stretched over three movies – well beyond its breaking point. The Wolfpack won’t be back. And that’s probably a good thing.