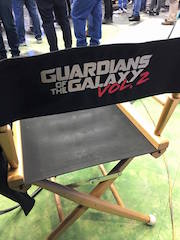 Director James Gunn is using Red’s 8K Weapon camera on Marvel’s latest cosmic adventures in Guardians of The Galaxy Vol. 2. Behind-the-scenes, Codex workflow systems, operated by Santa Monica, London and Atlanta based production services company Shed, are enabling the smooth and speedy transition of a river of 8K data from on-set into post production. The cinematographer on Guardians of the Galaxy Vol. 2 is Henry Braham BSC, who previously used Red Epic cameras on The Legend of Tarzan. He is one of the first DPs to deploy the new Red Weapon camera, fitted with the 8K Red Dragon sensor, on a long-form show, describing it as “the little big camera. Perfectly counterintuitive. And perfect for this production.”

The first Guardians of the Galaxy project was primarily captured with Arri Alexa XT, which features the built-in, battle-ready favored by Marvel Studios on all of its digital productions. When it came to meeting the big data challenges of the Red 8K Weapon camera for the superhero sequel, Marvel turned to Codex for an innovative Red workflow solution.

As always, Codex worked closely with the Marvel team to set up an efficient pipeline for Guardians of the Galaxy Vol. 2. Jesse Torres, vice president post production at Marvel remarks, “Codex has become our standard for digital productions and was the natural choice to facilitate the flow of data from set-to-post. Codex Vault is extremely robust. We can trust that our post partner Shed will be able to use the system with no issues. By choosing Codex, we can be completely confident that our data is not only secure, but delivered on time to whomever needs it.”

Matt Watson, colorist at Shed, who worked with the production and with Codex to set up a streamlined pipeline, says, “Using Codex for all our deliverables means we have one workflow for the various cameras that are being used – in addition to the Red 8K Weapons, the crew is also using Phantom and GoPro on occasion. Codex makes it simple.”

The size of the full 8K frame is 8192 x 4320 pixels, and the Red Weapon can capture 8K resolution at up to 75 frames per second (fps). With multiple cameras, the amount of RedCode Raw data generated every day on a visual effects blockbuster of this type is substantial. In 34 days, the production has generated over 100 TB of data, with the overall length of production estimated to be 81 days. Shed has plenty of experience in serving big data projects including Captain America: Civil War, which utilized the Arri Alexa 65 and Red Dragon 6K, as well as Jungle Book: Origins, which was shot using Alexa XT cameras. 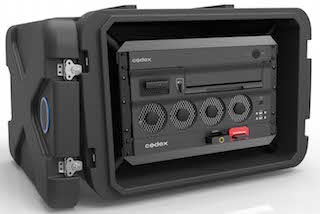 Principal photography for Guardians of the Galaxy Vol. 2, began in February 2016, with Shed specifying an entire Codex-based workflow from on-set through to post production, visual effects pulls and archiving. Production is due to wrap in June. As part of the daily routine, 1 TB Red Mini-Mags are loaded into a Codex S-Series Vault close to the set, where an initial check of the metadata is carried out, prior to the data being cloned to an 8TB Codex Transfer Drive. Codex Transfer Drives are proven as the fastest and most secure method of moving data from set to post, utilizing super-reliable SSDs and backed by the robust Codex File System.

A pair of Codex XL-Series Vaults are doing the heavy data-lifting at Shed Atlanta (where the movie production is based), processing the R3D Raw files with LUTs applied and rendering all the necessary deliverables – DNxHD 115 for Avid, PIX 720 and 1080P, and 4K Open EXR visual effects pulls ­– through Codex Production Suite, the fully-featured dailies system. ACES is also being used to manage the color, and ensure color consistency, throughout the process, from set into post and beyond.

The original 8K camera data, including important camera metadata, such as the camera gyro and accelerometer data, and any white balance changes are tracked and updated along with the editorial ALE files and tied together and tracked using Codex Backbone – the production management system that provides reports and facilitates the flow of information amongst all interested parties involved in the production. Codex Backbone is also being used to manage and provide all VFX pulls from the database created automatically during production and near-set dailies.