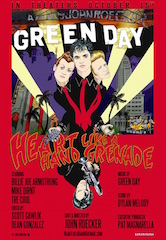 On the day of its world premiere at the 38th Mill Valley Film Festival, Rock and Roll Hall of Fame Inductees Green Day have announced a collaboration with Abramorama, Reprise Records and Vimeo to distribute the documentary, Heart Like a Hand Grenade, an unprecedented behind the scenes look at the writing and recording of their legendary album American Idiot. Abramorama will release the film theatrically in the United States on more than 135 screens on October 15 followed by an exclusive Vimeo On Demand release the next day, October 16.

On November 11 the film will be released in theaters in multiple countries around the globe including Australia, Canada, Czech Republic, Germany, Italy, Japan, Latvia, Mexico, New Zealand, Russia, Spain, United Kingdom and Uruguay. On November 13 the film will be available for purchase digitally and on DVD via Reprise Records.

"We can't believe this was shot over a decade ago. Little did we know that this was only the beginning of the adventure this record would go on to be," said Billie Joe Armstrong.  "We are stoked for our fans to see this footage for the first time and watch us try and figure it all out"

Captured on film by director John Roecker, Heart Like a Hand Grenade is considered by many to be a lost film. More than 10 years after the release of American Idiot, the 2015 Rock and Roll Hall of Fame Inductees present this time capsule rock doc that takes us inside the songwriting and recording process of their Grammy Award-winning punk rock opera. American Idiot achieved multi-platinum status worldwide and became a hugely successful Broadway show. Looking back on the band in the studio is both nostalgic and insightful—the band knew they had something good, but even they didn’t know how good.

Karol Martesko-Fenster and Evan Saxon, added on behalf of Abramorama, “We are pleased to be working directly with Green Day, and collaborating with our partners on rolling out this superb film directed by John Roecker to the many loyal fans who have been waiting for more than a decade to experience the thrill of the making of the game changing American Idiot.”

The theatrical event will screen in major cinemas around the country including at the Landmark Sunshine Cinema in New York City and ArcLight Cinerama Dome in Hollywood, as well as at many Harkins Theatres, Landmark Theatres, Marcus Theatres, National Amusements and Wehrenberg Theatres.

The film is available for digital pre-order (12.99 download) beginning today at vimeo.com/ondemand/heartlikeahandgrenade

To view the trailer for Heart Like a Hand Grenade www.greenday.com/heartlikeahandgrenade