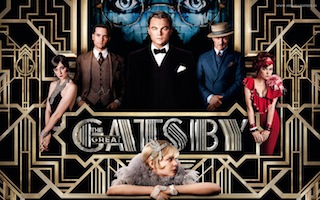 Imagine a time when every day is the 4th of July and every night is New Year’s Eve. Imagine a place filled with manic energy and garish opulence.  Welcome to the first half of The Great Gatsby.  This is really a story in two parts – one fueled by grand decadence, one told on a more human scale. They’re connected by characters who become more dimensional and even likeable as their summer moves on.  Based on a novel by F. Scott Fitzgerald published 88 years ago, it starts as unreal as a three-dollar bill, then evolves into a universal – if tragic – love story. Hollywood has made this movie three times before; they got it right this time.  Director Baz Luhrman has built a world that, initially, feels as if we’re inside an amusement park – all swirling colors, artificial hysteria. The camera is always moving; words float across the screen; the air fills with confetti, feathers, fireworks.  It’s surreal, intoxicating, unsustainable. But then, Luhrman turns his movie over to his actors and their performances turn this into a sensitive and substantial film.  Even at almost two-and-a-half hours, this movie doesn’t feel too long. The story is clear, the characters are complex, the excitement is contagious.  When Mae West, an actress of that era, once said: “Too much of a good thing is wonderful,” she could have been describing this movie.