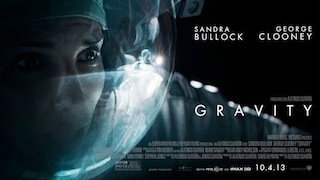 Warner Bros. Pictures’ Gravity will have its New York premiere at the AMC Lincoln Square on Tuesday, October 1.  Stars Sandra Bullock and George Clooney will join director/screenwriter Alfonso Cuarón for the special screening of the film, which has already garnered overwhelming acclaim both in the U.S. and abroad. Gravity will be the first motion picture to screen in Dolby Atmos at the AMC Lincoln Square, which is being specially equipped for the premiere.

Alfonso Cuarón said, “Just as 3D offers added visual dimension, Dolby Atmos creates a virtual reality of sound, which fully immerses the audience in the aural journey. There is no sound in space, so we incorporated music as an integral element of the movie.  The music was composed and designed for a surround experience—different harmonies emerging from the different speakers around the room, constantly moving, crashing and blending to create a dynamic experience.  A special sound mix was created for Dolby Atmos, taking full advantage of the amazing nuance, spread and separation of the speakers on the ceiling and the total range of all the speakers in the room.  Dolby Atmos is the sound experience I have always dreamed of.”

The event will also be attended by producer David Heyman and screenwriter Jonás Cuarón, and an array of industry luminaries, to be announced.  The screening will begin at 7:00 p.m., with red carpet arrivals beginning at 6:00 p.m.

Academy Award winners Sandra Bullock (The Blind Side) and George Clooney (Syriana) star in Gravity, a heart-pounding thriller that pulls you into the infinite and unforgiving realm of deep space.  The film was directed by Oscar nominee Alfonso Cuarón (Children of Men).

Dr. Ryan Stone (Bullock) is a brilliant medical engineer on her first shuttle mission, with veteran astronaut Matt Kowalski (Clooney) in command.  But on a seemingly routine mission, disaster strikes.  The shuttle is destroyed, leaving Stone and Kowalski completely alone—tethered to nothing but each other and spiraling out into the blackness.  The deafening silence tells them they have lost any link to Earth…and any chance for rescue.  As fear turns to panic, every gulp of air eats away at what little oxygen is left.  But the only way home may be to go further out into the terrifying expanse of space.