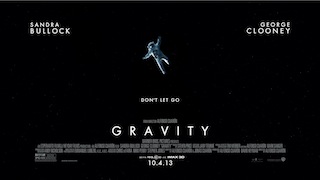 You have never seen anything quite like this before.  At a time in movie making where it seems possible for filmmakers to create any effect, no one has ever created effects like these.  It’s a movie with only three characters on screen:  George Clooney plays a version of his public persona – cocky, sure of himself, well aware of his attraction to women.  Sandra Bullock demonstrates her serious talent, playing a woman much different from the one she played in her last outing, Heat.  But the overwhelming character in this movie, the one that dominates every scene and taunts, traps and terrorizes the other two, is space.  Never has a filmmaker created Nothingness so realistically and suspended us in it for so long.  Several magazines claim to tell you how Cuaron accomplished all that – with multiple rigs and LED panels, with computer-controlled cameras, motion-controlled lights and a complicated system of wires – but you will forget all that when the movie starts.  Dialog is sometimes choppy and there is not much story here.  But the long scenes keep us in the movie and in the helplessness of the situation and the effects not only serve the story, they provide the reason for the story.  Bits of humor also help along the way; Bullock does give an amazing performance, and at one point, Clooney provides a nice surprise that is also nicely explained. Although I saw this in 2D, it seems to be a film for which 3D is made.  At a time when various entrepreneurs are trying to transport ordinary people into space, Cuaron has found a way.  My advice:  get down to your local theatre and sign up for this mission.  You’re in for a real adventure.