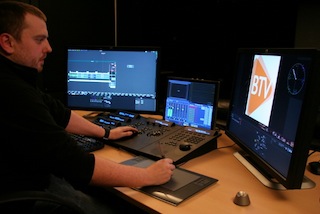 Experienced freelance colorist and online editor Ian Grey was responsible for the stylish 2D color grading for Globe on Screen's three titles for Shakespeare’s Globe’s 2014 theatre season. The plays include three of the playwright's most popular and well-known works: A Midsummer Night’s Dream, Macbeth and The Tempest, which were recently released through the Arts Alliance Media. Grey did the grading on a Mistika. Mastering and deliverables, including conversion for cinema, were completed at BTV Post by its digital media services department.

Grey said, “The main challenge of the grades was that the recordings took place in an open air theatre, often transitioning from day to night. Maintaining continuity in the grade was crucial, taking into the account the sun setting, especially as the final edit could be cut from performances on different days and nights.”

“A key tool in Mistika that I used extensively during the initial primary grade, was the digital printer lights, which made balancing the multiple cameras a simple and fast process,” Grey continued. Being able to quickly amend the white point, black point, overall gain or overall contrast with access, to not only red, green and blue vectors, but also cyan, magenta and yellow, meant I could get through the nearly three hour-long performances at a speed that was vital to completing the jobs on time.”

“Another issue we had is that the stage was lit by tungsten lights and the cameras are white-balanced for 3400k color temperature, but because some of the performances took place during the day, a majority of the audience was lit by natural daylight, which left a blue color tint, making them feel cold,” he added. “So, in the grade for Tempest, I corrected this by drawing shapes around the audience so that I could isolate them for a separate grade. Because Mistika's HSL qualifiers pull very clean keys, I was able to combine with the shapes to produce great results. At times, due to either the camera movement, shot composition or performers' movements, it meant some complicated shapes had to be used, but Mistika made this a simple task with its user-friendly shape editor with key-framing, combined with the new fantastic cloud-based auto-tracker tool, which I cannot underestimate how much time this saved me.”