The documentary Baby God, from first-time director Hannah Olson and executive produced by Academy Award nominees Heidi Ewing and Rachel Grady, is a shocking examination of the work of a Las Vegas fertility specialist, Dr. Quincy Fortier, and the many women he guided to pregnancy through the use of his own sperm, often without their knowledge or consent. The documentary follows his newly discovered offspring as they grapple with the scope of his misdeeds and the impact that his genes may have on their own identities.

Post-production finishing for the film was completed at Goldcrest Post in New York. Senior colorist Marcy Robinson worked with Olson and cinematographer Justin Zweifach in applying the final color grade, blending expansive original material and a huge assortment of archival media into a seamless, gripping narrative.

Visually, the film is simple and naturalistic, almost austere, an aesthetic that allows the horrifying sadness of the story to speak for itself. Zweifach, who worked with a Canon C300 camera, captured both interview segments and exterior landscapes of Nevada, Utah and Minnesota, where the principals reside, in a spare and hauntingly beautiful manner.

“The film tells one big story, and many smaller, more intimate stories,” he explains. “There are the horrendous actions of Fortier, and then you have deeply personal stories of people struggling with their identity. We wanted to find a way to capture both, so we contrast the epic landscapes where the story takes place with details like people’s faces and hands. This disarmingly simple concept was refined during color sessions at Goldcrest Post. Robinson’s task was to establish cohesion between the pristine original material and the extensive archival media gathered by Olson. The latter included decades old home movies, black & white photographs, grainy news footage, medical micro-photography, and much more. 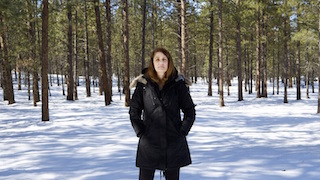 Olson says that Robinson’s background in print photography gave her a natural feel for the archival media. “She thinks about color in a very naturalistic way,” Olson says. “She doesn’t like to use colors that can’t be produced photo-chemically. I loved that because so much of this film derives from archival film and home movies. Her approach to that made sense.”

“Marcy’s approach to color is instinctual,” adds Zweifach. “She brought something natural and beautiful to the imagery, without calling attention to the process.”

Robinson took special care in grading landscape imagery. Much of the film takes place in Las Vegas, which is revealed through panoramic shots of rows of nearly identical houses on the city’s suburban outskirts and sweeping views of the surrounding desert and mountains. “Las Vegas is often presented on film in a garish way,” says Olson. “We wanted to depict it differently. We thought of the landscape as a symbol for the vastness of Fortier’s seed and the space separating his children. It needed to seem limitless and natural.”

Olson says, that, in that way, the color grade, while adhering to realism throughout, plays a vital storytelling role. “The color is constrained, but in a smart, interesting way,” says Olson. “Marcy got the vision of the film. She helped sew the seams together.”