Godzilla to be Mixed and Released in Dolby Atmos Sound 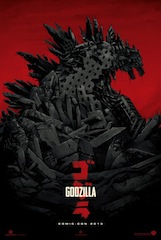 The highly anticipated feature film Godzilla, directed by Gareth Edwards, will be mixed and released in the Dolby Atmos cinema sound platform. The film, from Warner Bros. and Legendary Pictures, will arrive in U.S. theatres on May 16.

“Godzilla is one of the world’s most iconic monsters,” said Edwards. “I’m really excited we are using Dolby Atmos to truly bring this terrifying force of nature to life.”

“By using Dolby Atmos to place and move sounds anywhere in a movie theatre, Gareth Edwards and his team can recreate the world of Godzilla right in the auditorium, making audiences feel as if they, too, are in the middle of the onscreen action,” said Doug Darrow, senior vice president, cinema, Dolby Laboratories. “Dolby Atmos is a real paradigm shift from traditional channel-based approaches like 5.1, 7.1, and 11.1. With this new object-based approach, you are no longer just watching a movie, but experiencing it.”