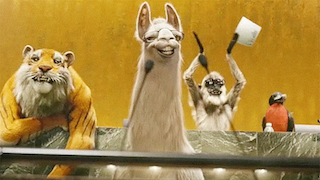 Last Friday, September 25th, digital cinema history was made and the course of cinema advertising and marketing changed forever, with the release of a 60-second commercial promoting the United Nations’ Global Goals initiative. The upbeat ad, titled #WeHaveAPlan, was animated by Aardman Animations, directed by Sir John Hegarty and narrated by Liam Neeson and Michelle Rodriguez with music from Peter Gabriel. The ad was mixed in Dolby 5.1 and Dolby Atmos immersive sound technology, and mastered and distributed to more than 30 countries in all cinema formats by Unique Digital. It was the first global cinema ad ever distributed and was done on behalf of SAWA the Global Cinema Advertising Association. In the U.S the ad will run on the networks of Cinema Advertising Council members National CineMedia, Screenvision and Spotlight Cinema. The ad premiered in New York’s 42nd Street AMC Empire prior to its worldwide exhibition and will continue running around the world for a year.

Prior to the Thursday, September 24th premiere, as guests arrived and sipped champagne in the theatre lobby, outside Pope Francis had just arrived in New York City, in part to address the United Nations, which was in session last week. The air was charged with even more energy than usual in Manhattan as hundreds of thousands of people lined the streets of the city’s East Side. The AMC Empire, on the West Side, is within a city block of New York’s biggest bus terminal – The Port Authority – and is next door to Madame Tussaud’s famed wax musuem. The proprietors of Madame Tussauds had taken the initiative that afternoon of putting their wax statue of Pope Francis in the entryway and a large crowd had gathered to take pictures and selfies. The evening was warm and the atmosphere among the tourists and commuters on the street outside the theatre was more carnival than spiritual.

At the reception inside, there was a more subdued air of anticipation. A long list of people had spent many months planning, organizing, and completing the enormous amount of work needed to create an advertising campaign to raise awareness about seventeen challenges that the entire world face. An executive with one of the American cinema networks that will be showing the ad said the focus is to make as many people in the world aware of the challenges and to encourage them to help achieve these goals. Asked if the effort wasn’t also showcasing the global possibilities of cinema advertising, he conceded that it was. But, he wondered, how many advertisers could or would take advantage? 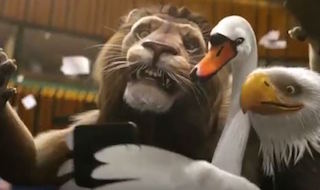 British television personality Emma Freud opened the evening saying she was there in part, but only in part, because her husband, filmmaker Richard Curtis (Four Weddings and a Funeral) had produced the ad. Together they are among the people who have been tirelessly promoting the ad and the overall campaign. Freud listed the seventeen global goals, which include eliminating poverty and hunger, strengthening education, equality for all, addressing climate change, rebuilding our infrastructures and creating jobs and sustainable growth. She said if the effort is a success, by the end of this week as many as seven billion people will have been made aware of the goals and challenged to do their part to achieve them.

As of now, the plan calls for the ad to run in 31 countries and 15 languages. One speaker referred to the goals as “mankind’s first to-do list for its leaders.”

Richard Curtis was the final speaker before the spot ran. He said there were many approaches and ideas discussed prior to creating the campaign. In the end, the decision was made to take a lighter approach and avoid a dark serious message. The emphasis is that positive change has already happened. He quoted Bill Gates saying, “We are making progress” and gave this example: in 1990 nineteen million children died of hunger before the age of five; last year that number was reduced to six million.

The 60-second spot, which was shown twice during the premiere event, takes places at the U.N. The setting is the U.N. forum and the speaker at the podium – a llama – declares victory for the world. The seventeen goals have been met and the delegates – animals from all over the world – cheer in celebration. Heather Wright of Aardman Animation said that animals were used instead of people because animals tend to be more universal, can visually represent various nations and are less prone to misinterpretation. They’re also more fun in a movie. 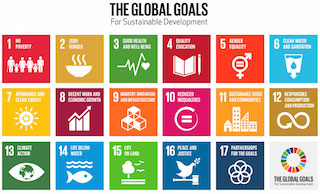 Cheryl Wannell, general manager of SAWA said, “The Global Goals aim is to make these goals famous and what better place to do that than on the big screen. Cinema educates, inspires and influences people by changing hearts and minds. SAWA, facilitating through our Cinema Advertising Global network, are able to screen the First Ever Global Cinema Ad to promote the Global Goals in over 30 countries.

“The delivery matrix required to ensure the correct delivery of all languages, audio mixes, subtitles, aspect ratios, file formats and local naming conventions and requirements was staggering,” said Mark Stephen, director of sales for Unique Digital. “Unique Digital is proud to have completed the on time delivery of the world’s first global cinema advert. The challenges overcome and experience gained from the project places Unique Digital Production at the forefront of cinema advertising DCP production and delivery. We are proud to know our output will be seen on screens across the globe. It’s not often you get the chance to be involved in such a pioneering initiative so we grabbed the opportunity with both hands.”