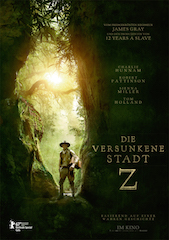 CinemaNext has announced that it has equipped 25 screens in 13 cinemas across Germany with EclairColor technology. In conjunction with these installations, Ymagis Group’s content services arm, Eclair, has overseen the EclairColor mastering of the film The Lost City of Z, which opens in cinemas in Germany March 30. The film from critically acclaimed director James Gray is distributed by StudioCanal in both Germany and France.

EclairColor is available to all German cinema exhibitors, regardless of screen or type. The equipment can be used to play EclairColor mastered content (4K or 2K) as well as standard DCI content. The proprietary HDR technology will be showcased at a specially built, 16-seat screening room at the upcoming CinemaCon convention from March 27-30 in Las Vegas.

To date, a total of 45 screens are equipped with EclairColor. Nineteen are in France, one is in Tunisia and more than two dozen are in Germany. German theatres embracing EclairColor include:

“EclairColor offers cinemas the opportunity to significantly improve projection quality at an affordable cost as well as benefit from flexible planning since EclairColor projection systems can be used to play content in both standard format and EclairColor,” said Karl-Joachim Lohkamp, general manager of CinemaNext Germany. "With The Lost City of Z in EclairColor, beautifully filmed by director of photography Darius Khondji, audiences will discover unprecedented image quality with richer colors and heightened details.”

“We are delighted to see German cinema exhibitors embracing our EclairColor HDR technology so rapidly after the re-release of La La Land back in February”, said Jean Mizrahi, founder and CEO of Ymagis Group. "As I indicated before, Germany is key to our European EclairColor roll-out strategy and with 13 cinemas and 25 screens, we believe it’s a great achievement for our teams and sign of confidence in our proprietary process.”

“Cinemas, from the earliest days, have been on the cutting edge of image and sound innovation, and they must remain an experience unlike any other,” said Till Cussmann, senior vice president of CinemaNext. “The significant advantages that EclairColor provides are clearly visible to both audiences and exhibitors, which should greatly ease the adoption of this new technology by cinemas since we have rendered this process compatible with a range of existing projectors, allowing for virtually immediate access to our solution.”

EclairColor is a registered trademark of Ymagis Group.