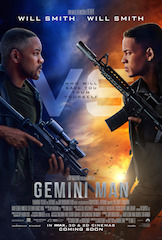 CJ 4DPlex and Paramount Pictures have expanded their ongoing partnership to release the action-thriller Gemini Man in the ScreenX format. Directed by Ang Lee. Gemini Man in ScreenX will be shown in theaters worldwide beginning October 2, on 233 screens, across 22 countries. The film opens in the U.S. on October 11 at Regal Cinemas, B&B Theatres and CGV Cinemas.

Gemini Man in ScreenX will feature key sequences of the film expanded and projected onto the left and right side walls of the auditorium, showcasing literal wall-to-wall action. As Henry Brogan (Will Smith) faces off against his younger self, the action heats up and ScreenX expands the fight onto the side panels where bullets graze past the audience’s peripherals, turning up the tension. In addition, ScreenX will expand the landscapes in the film, expanding the groundbreaking visual clarity of Gemini Man into the immersive and panoramic screens of ScreenX.

The announcement between the two companies follows past successful releases of A Quiet Place, Mission: Impossible – Fallout, Bumblebee, and Crawl in 4DX, another immersive technology from CJ 4DPlex that features motion seating and environmental effects ranging from water, scent, wind, fog, snow and more to elevate the 2D film-going experience into the fourth dimension. In the U.S., Gemini Man in 4DX will screen with Regal Cinemas, Cinepolis, Marcus Theatres and CGV Cinemas.

“We are thrilled to announce the extension of our partnership with Paramount Pictures’ to release the first-ever ScreenX title, Gemini Man, in our stunning panoramic format,” said CJ4DPlex CEO JongRyul Kim. “The groundbreaking technology of the film pairs excellently with ScreenX, extending the stunning image quality of Will Smith as a 20-year old in action onto the walls of the auditorium, adding another level of immersion and intrigue to the cinema-going experience for Gemini Man.”

“With the success of Paramount Pictures’ films in 4DX, we are thrilled to continue the partnership and introduce Gemini Man as the first Paramount Pictures’ title to be screened in the immersive ScreenX format,” said Mark Viane, president of international theatrical distribution at Paramount Pictures. “Audiences will be amazed by the capabilities of the ScreenX technology, which will offer stunning visuals and action sequences expanded onto the side screens.”