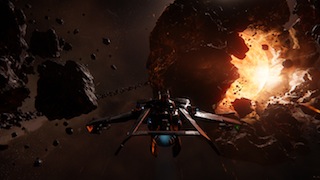 “Everyone at Cloud Imperium has a Shotgun account,” said Chris Olivia, chief visual officer, Cloud Imperium. “It’s not just the artists; all departments – including engineers, coders and designers – use Shotgun to organize assets, deliver feedback and communicate internally. We’ve used Shotgun since the beginning of production on Star Citizen, and it has really helped us manage the information overload.”

With three offices based in Santa Monica, California; Austin, Texas and Manchester in the UK, and an international team of contracted companies and freelance artists, Cloud Imperium produces new assets for multiple game modules each day. Using Shotgun’s web-based platform, the studio’s global network of artists are able to share and access assets across the same database from any location. By uploading assets into Shotgun, the studio has a record of all artwork and a way to connect comments and feedback to each asset. “It’s really provided us with a reliable way to organize art,” said Olivia. “And if we ever need to go back and evaluate our work, we can view reports directly from Shotgun to see the history of an asset since it was first created.”

Shotgun is also used to facilitate the review process for Cloud Imperium, which is critical to the development of Star Citizen because the studio is constantly issuing new updates as part of their commitment to transparency with their crowd-sourced backers. Though the game is not officially scheduled to launch until sometime in late 2015, a steady stream of pre-alpha versions are continually released. The faster assets can be funneled through the review process and approved, the sooner they are available to test in the pre-alpha version of the game. Shotgun helps speed up this process by automatically keeping internal communication on track and organizing assets and feedback without tying up additional cycles.

A large percentage of Shotgun review sessions consist of informal communication between artists and Chris Roberts, Cloud Imperium’s founder who oversees all aspects of production. Artists upload different asset versions to the Shotgun database, and Roberts views the versions and responds with comments and feedback, often in real time. For more formal review sessions, the team organizes meetings with multiple offices via Skype and sets up a Shotgun playlist with relevant artwork they need to discuss. Using Shotgun’s cineSync plug-in, the team reviews shots and sequences and ensures that all notes are uploaded directly into the Shotgun database. They have also started using Shotgun’s Screening Room tool to facilitate collaborative review sessions between artists in Austin and the Manchester-based editorial team.

In addition to production tracking and review, Cloud Imperium has been working with the newly released Shotgun Client Review Site to evaluate new artists with concept and modeling tests. “To review artists’ skills and capabilities we like to show them our artwork for reference, then have them match our style and recreate the assets,” said Olivia. “We set up a playlist with the reference artwork and share it with the artists via the Client Review Site. This allows the artists to view the art without giving them full access to Shotgun. It’s really easy! We don't have to set up any extra users in Shotgun or copy any of the assets. It wasn’t quite designed for this use, but Client Review has proved to be a perfect tool for us in recruitment of new artists.”

In the future Cloud Imperium plans to integrate Shotgun further into its pipeline to track artist hours and map hours to budget, shots and schedules.

“Our artists love Shotgun, because it’s very visual and easy to use,” said Olivia. “It’s a single tool we’re able to funnel all of our art and communication through, which helps us deliver more of the gameplay for users to test in the beta mode sooner. With Shotgun our team is able to keep pushing forward in production.”