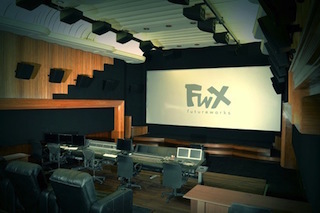 FutureWorks Media, one of Asia’s most prominent post-production houses, has renewed its partnership with Barco. A tour-de-force in international and domestic film and television solutions, FutureWorks has recently invested in a Barco 4K post-production projector at its Mumbai facility.

The firm has relied on Barco technology since 2008, and is confident that the brand-new investment in Barco 4K projector will bring significant value to its regional and worldwide customers in the form of critical color stability and superb color matching needed for consistent post-production monitoring.

The company’s name indicates where its focus lies: FutureWorks is committed to providing state-of-the-art facilities that bring the future of post-production to film and TV companies from across the globe, and has numerous international and domestic titles to its name. With locations in Mumbai and Chennai and boasting some of the region’s brightest production talent, FutureWorks has a keen interest in staying at the top of its industry in every way, from expertise to technology.

The many customers of FutureWorks expect great results. Since 2008, the company has relied upon 2K Barco solutions and has been very pleased with the quality of the Barco imaging engine. However, with the debut of the world’s first 4K digital projector designed specifically with the needs of post-production houses in mind, FutureWorks went for an upgrade with Barco.

“We were Barco India’s first customers when it comes to post-production solutions, and we’ve been extremely satisfied for almost a decade, said Rahul Purav, senior colorist at FutureWorks. “However, to stay at the top of our game, opting for the Barco 4K projector was a must. Its color stability is top-notch, and we’re already familiar with the smooth Barco modus operandi, which was a major factor in our decision-making process.”

In terms of projection, the world of post-production is a demanding environment very different from other projection applications. Light output and distribution uniformity are key elements of the monitoring process, and therefore some of the key differentiators of the Barco 4K post-production projector. Barco Communicator software is also equipped with an intuitive user interface tuned to post-production environments, saving time and streamlining workflows.

“The implementation was quick and seamless – we were up and running within a day,” Purav said. “The Barco projector makes it easy to handle a wide range of color spaces, and alignments are simple. The projector’s color rendition and contrast ratios are unbelievably consistent and up to every post-production standard. Add to that Barco’s proactive support team, and you have a true relationship of trust.”

“This project with FutureWorks demonstrates our commitment to generating momentum in India, not just in cinema, but in niche AV markets as well – it really is the land of opportunity,” said Rajiv Bhalla, managing director at Barco India.