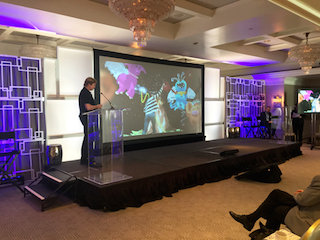 Futuresource Consulting recently hosted its latest New Content Horizons event, #Newcontent2016, in Hollywood. There, a group of entertainment industry executives explored business opportunities across the home entertainment and broadcast arena. The importance of content was discussed together with cutting edge services, platforms, hardware and technologies, with the goal of projecting a collective vision of the future digital entertainment landscape.

Keynote speaker George Barrios, chief strategy and financial officer at WWE, kicked off proceedings and shared his experiences from the WWE network, talking about disruption, innovation and transformation at WWE. He highlighted the importance of clear innovation strategies to monetize OTT entertainment content across both traditional and new digital platforms, reaching and ensuring customer satisfaction across 650 million TV households worldwide, in 180 countries.

The discussion then turned to the future of OTT and the decline in linear viewing habits. Erick Opeka, executive vice president of networks for OTT channel operator Cinedigm said, "As we look at the various buckets of consumers making the switch, the canary in the coal mine is the younger viewer." He also highlighted research showing that millennials are averaging more than three OTT subscriptions each, a number that has to have traditional Pay-TV operators on their back foot.

"People are experimenting, taking on the idea of cord cutting and cord shaving," Opeka continued. "There are a lot of people interested in this space." On wrapping up the panel Carl Hibbert, associate director of media and entertainment content for Futuresource Consulting said, "Nearly 100 million homes in the USA still take pay-TV services so the total death of traditional services may be a little implausible."

The panel discussed trends around the adoption of packaged media, how it is still in decline yet it still dominates home video spend in most markets. When it came to transactional digital video David Sidebottom, principal analyst at Futuresource Consulting, quoted from the firms latest consumer study Living with Digital suggesting that, "30 percent of US consumers buy or rent transactional digital video," with the studios summarizing their plans to take that figure to the next level. On a cinematic note, box office data shows that cinema attendance is booming globally, up 5 percent in 2015, with blockbusters continuing to break records. Steve Nickerson, president, home entertainment of Broad Green Pictures said, "It is all about being flexible, putting the right content on the right platform." 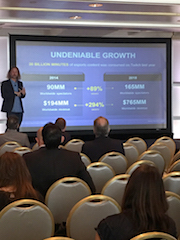 Andy Swanson, vice president eSports evangelist for Twitch then took center stage discussing the increasing popularity and growth of the eSports sector, demonstrating that it is much more than a flash in the pan fad, highlighting the level of passion that there is at a competitive level and also the latest viewing figures. "The engagement, the social interaction you find in live sports is very much the same in competitive gaming." He said Twitch logged an estimated 90 million eSport viewers, predicting that the number would rise nearly 90 percent to 165 million by 2018.

The future of premium sports was the next topic on the table, involving industry experts from Omnigon, Turner Sports, Twitch and EverSport Media. Sports programming is widely acknowledged as a crucial part to the Pay-TV business and the key differentiator between rival services, creating customer stickiness. Linking to the Twitch eSports presentation Turner Sports highlighted the launch of its ELEAGUE eSports channel consisting of 30 hours of weekly competition streamed live via digital.

Tom Sahara vice president, operations and technology at Turner Sports said, "Our audience is anyone who watches video, we've gotten away from talking about it as TV." Sports — and eSports — is one of the last bastions of non-DVRable content. All panellists agreed that it is all about connecting the customer with sports content wherever and whenever and the attraction with OTT is that it is more adaptable, but not everything works, some more surprisingly do than others. Carl Kirchhoff, founder of EverSport Media highlighted one of his more surprising sports-stream successes as being NCAA women's hockey, "There are just so many relatives around the world who wanted to watch it."

Next up on the stage was Cliff Fluet of Lewis Silkin with senior executives from Gleam Futures, Jukin Media and Rightster, discussing the monetization of content and talent through social and discovery. Industry experts from Samsung, MediaTek, DTS and Sony then shared their thoughts regarding the status, market drivers and challenges of 4K UHD video adoption in the end-to-end broadcast chain.

The last two sessions were all about virtual and mixed reality. 2016 has seen VR actually became a reality. The first session explored the early innovations in the sector, executives from NextVR, Google, Intel, Littlstar and Virtually Live reviewed the applications that work and assess the monetization opportunities that this exciting segment offers. Finally, Rikard Steiber, senior vice president of Virtual Reality at HTC shared glimpses of the Tilt brush by Google and theBlu by Wevr programs that his company has showcased driving more innovation in this sector.