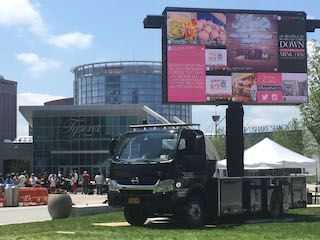 Fresh Air Flicks founder/owner Glen Sanders spotted the trend of outdoor cinema early on as it gained traction in Brooklyn and other communities. Starting out in 2004, Sanders and Fresh Air Flicks were providing giant inflatable screens for events like Movies with a View that would bring as many as 8,000 people out for an evening to watch films in the park beneath the Brooklyn Bridge.

As demand grew for that kind of recreation during the longer daylight hours of summer, Sanders in 2015 invested in a 13-foot-wide, 8-foot-high, two-sided LED display mounted on a rotatable axis aboard a flatbed truck, which allowed him to show two different shows simultaneously on either side of the display.

This rig took him from event productions on the Intrepid Sea, Air & Space Museum, an aircraft carrier parked on Manhattan’s west side, to Disneyworld in Orlando, Florida. In the meantime, Sanders was finding that the switching systems he needed to coordinate and sync picture and audio were not up to the job. He found a solution earlier this year when he discovered the Roland XS-82H 8-in x 2-out Multi-Format AV Matrix Switcher.

“The Roland XS filled every need I had once I moved to LED,” says Sanders. “At first, I was very pleased with how it would let me show different content on either side of the screen simultaneously. But as I got into it I realized that its built-in audio capability also meant I could control audio and video from a single device. I could run the entire show from a laptop in the truck cab, whereas before I had to have two separate devices for video and audio. With the XS, I had a single user interface that was simple to use and let us control everything.”

“It’s really changed things up,” he says. “The flexibility I get along with great sound and picture gives me a degree of flexibility I never had before,” he says. Sanders remarks that he’s already planning for a second truck and screen as business booms, and the Roland XS-82H switcher will be part of the growth. “The XS-82H gives me more power and capability, and that’s going to help me grow my business. And that’s what you want technology to do for you.”