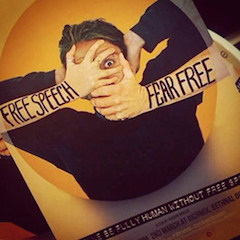 The Dixie State University DocUtah International Documentary Film Festival is proud to present the world premiere of the compelling documentary, Free Speech, Fear Free, which asks a burning question of our time, "What is free Speech?"

At 15, British teenager, Ramsay Tarquin asked his father what he thought free speech meant. With his father's encouragement, Tarquin set out to see how individuals defined, or could not define, exactly what that phrase meant. The result several years later is a riveting documentary, which explores how free is free speech, how controlled or manipulated speech can be by governments and how important it is. The film claims to get to the core of what free speech really is, whether we need it, and whether it exists. Tarquin said, "I cannot stress how much free speech is under attack." Tarquin will be hosting two screenings of his film at DocUtah.

Tarquin seeks out people in the street as well as well-known controversial figures such as Julian Assange, who said, "Our ability to communicate is important because from it derives everything that we think about as civilized in a civilization, every law, every regulation, every constitution and in fact every other right derives from the practice of communicating with each other."

"We are honored that Ramsay chose to premiere his powerful documentary at DocUtah this year," said Phil Tuckett, executive director for DocUtah.

Free Speech Fear Free, is for Tarquin’s generation, with its updates, likes, tweets and its often cavalier approach to our essential and hard-won freedoms. It will describe the central role this freedom should have in our lives, and how we must fight and struggle to nurture and retain it. "Freedom of speech is something that we often take for granted," said Jude Law, who appears in the film.

Through the use of interviews with high profile experts, cases and life stories Tarquin has created a documentary exploring the truths behind freedom of speech, getting to the core of what it really is, what it's like to have freedom taken away, and all the issues surrounding a right everyone takes for granted. The film studies the nature of censorship, hate speech and an important topic currently being heavily debated at the moment: privacy. It seeks to answer questions such as to what extent should there be limitations on freedom of speech? Where should we draw the line between privacy and freedom of speech?