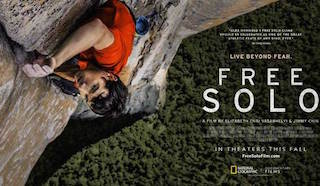 The Broadcast Film Critics Association and the Broadcast Television Journalists Association have announced the nominees for the third annual Critics’ Choice Documentary Awards. The winners will be presented their awards at a gala event November 10 at BRIC in Brooklyn, New York. The film Free Solo leads this year with six nominations and one honor, including Best Documentary, Jimmy Chin and Elizabeth Chai Vasarhelyi for Best Directors, Best Sports Documentary, Most Innovative Documentary, Best Cinematography, Best Editing and a Most Compelling Living Subject of a Documentary honor for Alex Honnold.

Recognized with five nominations are Minding the Gap and Wild Wild Country.

The nominations for Minding the Gap are Best Documentary, Best Sports Documentary, Bing Liu for Best Director and for Best First Time Director, and Best Cinematography.

Recognized with four nominations are Dark Money, Hitler’s Hollywood and Won’t You Be My Neighbor?

The nominations for Hitler’s Hollywood are Best Documentary, Best Political Documentary, Rüdiger Suchsland for Best Director, and Most Innovative Documentary.

The nominations for Won’t You Be My Neighbor? are Best Documentary, Morgan Neville for Best Director, Most Innovative Documentary and Best Editing.

Three Identical Strangers received three nominations and an honor, including Best Documentary, Tim Wardle for Best Director, Best Editing and an honor for David Kellman and Bobby Shafran for Most Compelling Living Subjects of a Documentary.

At the gala ceremony, filmmaker Stanley Nelson will be presented with the Critics’ Choice Impact Award.

For the first year, the Critics’ Choice Documentary Awards has introduced the Catalyst Sponsorship, a program for industry leaders to support the event. The inaugural sponsors include Focus Features, National Geographic Documentary Films, Netflix, Curiosity Stream, and others.

“We are thrilled to celebrate this year’s outstanding documentary work at the upcoming event,” said Broadcast Film Critics Association president Joey Berlin. “The year 2018 has been called The Year of the Documentary and we are so happy to give these films and shows the recognition and high praise that they deserve.”

The Critics’ Choice Awards are determined by qualified members of the Broadcast Film Critics Association (BFCA) and the Broadcast Television Journalists Association (BTJA), and feature multiple categories across both television and film. Qualified members of BFCA and BTJA will choose the winners from amongst the nominees in voting from November 7-9.

The nominees are determined by two committees, made up of BFCA and BTJA members with a background and expertise in the documentary field, chaired by Jennifer Merin and Christopher Campbell. Winners will be chosen from among the nominees by a vote of qualified members of the BFCA and BTJA. The third annual awards ceremony will be produced by Bob Bain Productions and Berlin Entertainment.

The eligibility period for the third annual Critics’ Choice Documentary Awards runs from January 1, 2018 and includes any film or television program scheduled to premiere on or before December 31, 2018.