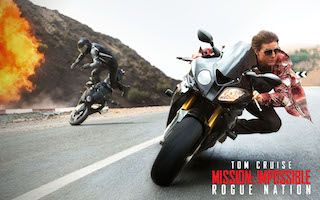 The Chris Columbus-directed Pixels, starring Adam Sandler, Kevin James, Michelle Monaghan, Peter Dinklage, and Josh Gad, will be the first Sony Pictures title scheduled to be resented in Dolby Vision. In Pixels, aliens misinterpret video feeds of classic arcade games as a declaration of war and attack the Earth in the form of the video games.

“Pixels is one of the most visual effects-rich movies I’ve ever been involved with. The video game elements pixelate and glow with energy, making the stunning visuals an ideal movie for the Dolby Cinema experience,” said Michael Barnathan, producer of Pixels. “Our team was incredibly excited to collaborate with Dolby on color grading and sound mixing the movie with Dolby Vision and Dolby Atmos. The combination of amazing sound and vibrant imagery—bright, clear, and full of color—makes Pac-Man, Donkey Kong, and the rest of the arcade game characters larger than life on the big screen.”

In Paramount Pictures’ Mission: Impossible—Rogue Nation, audiences go deep undercover as Ethan Hunt and team take on their most impossible mission yet, eradicating the Syndicate—an international rogue organization as highly skilled as they are, committed to destroying the IMF.

Universal Pictures’ Everest takes moviegoers on a thrill ride that is inspired by the incredible events surrounding an attempt to reach the summit of the world’s highest mountain. Everest documents the awe-inspiring journey of two different expeditions challenged beyond their limits by one of the fiercest snowstorms ever encountered by mankind.

In the fourth installment of Lionsgate’s global blockbuster The Hunger Games franchise, The Hunger Games: Mockingjay—Part 2, audiences will see Katniss Everdeen and District 13 engage in an all-out revolution against the autocratic Capitol.

“Dolby Cinema delivers the ultimate experience to any movie, and we are excited to see major studios like Lionsgate, Paramount, Sony, Fox, and Universal release their first Dolby Vision titles,” said Doug Darrow, senior vice president, cinema, Dolby Laboratories. “From action-adventure thrillers to science-fiction and retro arcade games, these Hollywood blockbusters will deliver unprecedented imagery and unparalleled sound that will transport audiences into these movies in a unique and powerful way when experienced at Dolby Cinema locations.”

In addition, Twentieth Century Fox plans to bring its first slate of Dolby Vision titles to Dolby Cinema. “We are excited for our films to be shown in Dolby Cinemas across the globe and look forward to announcing our upcoming slate to be graded in Dolby Vision,” said Chris Aronson, president of domestic distribution, Twentieth Century Fox. “Dolby Vision and Dolby Atmos will allow our audiences to further enjoy their cinematic experiences, propelling moviemaking to the next level.”