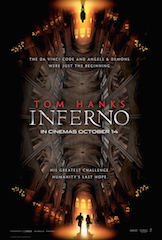 Academy Award winner Ron Howard returns to direct the latest bestseller in Dan Brown’s (The Da Vinci Code) billion-dollar Robert Langdon series, Inferno, which finds the famous symbologist (again played by Tom Hanks) on a trail of clues tied to the great Dante himself. When Langdon wakes up in an Italian hospital with amnesia, he teams up with Sienna Brooks (Felicity Jones), a doctor he hopes will help him recover his memories. Together, they race across Europe and against the clock to stop a madman from unleashing a global virus that would wipe out half of the world’s population. The screenplay is by David Koepp, based on the novel by Dan Brown, and the film is produced by Brian Grazer and Ron Howard.

“With the worldwide scope of a Robert Langdon adventure and the incredible amount of detail in each shot, I was excited by the possibilities for immersive storytelling that Dolby Vision could provide,” said Howard. “Working with Dolby Vision allowed us to bring details out in the darker scenes, with rich contrast, but also delivers amazing color that truly places the audience in every frame. The stunning images, when combined with the Dolby Atmos soundscapes, deliver a visceral experience with incredible detail that brings the experience all together.”

From Lionsgate, Deepwater Horizon, inspired by the true story of the oil rig explosion in the Gulf of Mexico that rocked the globe on April 20, 2010, chronicles the courage of those who worked on the Deepwater Horizon and the extreme moments of bravery and survival in the face of what would become one of the biggest man-made disasters in world history.

Meanwhile Lionsgate’s La La Land, written and directed by Academy Award nominee Damien Chazelle, tells the story of Mia (Emma Stone), an aspiring actress, and Sebastian (Ryan Gosling), a dedicated jazz musician, who are struggling to make ends meet in a city known for crushing hopes and breaking hearts. Set in modern-day Los Angeles, this original musical about everyday life explores the joy and pain of pursuing your dreams.

Twentieth Century Fox’s Miss Peregrine’s Home for Peculiar Children directed by Tim Burton begins with the protagonist, Jacob who discovers clues to a mystery that spans different worlds and times and finds Miss Peregrine’s Home for Peculiar Children. But the mystery and danger deepen as he gets to know the residents and learns about their special powers.

Legendary/Universal Pictures’ The Great Wall, starring Matt Damon and directed by Zhang Yimou, tells the story of an elite force making a valiant stand for humanity on the world’s most iconic structure. The first English-language production for Yimou is the largest film ever shot entirely in China. The Great Wall also stars Jing Tian, Pedro Pascal, Willem Dafoe, and Andy Lau.