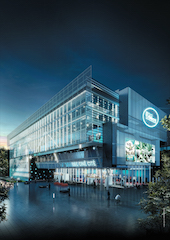 Les Cinémas Gaumont Pathé – the number one cinema chain operator in France, the Netherlands and Switzerland – will open France’s first CJ 4DPlex 4DX theatre early next year. The theatre will be located at brand new Pathé’s La Villette multiplex in Paris, which is opening mid-December 2016. This location is the largest cinema in Northern Paris, with 16 screens and 2,900 seats.

“We are very delighted to open the first ever 4DX theatre in France,” said Martine Odillard, president of Les Cinémas Gaumont Pathé. “The French love various leisure and entertainment opportunities, and they will welcome the chance to experience an unprecedented and immersive 4DX experience. With this agreement, Les Cinémas Gaumont Pathé will solidify its position as a pioneer in the cinema exhibition business in France, delivering a fully immersive cinema experience to French moviegoers.”

Since making its first debut in Europe in 2012, 4DX has expanded throughout the region and is now operating in 15 European countries, including Russia, Hungary, Poland, Czech Republic, Bulgaria, Croatia, Ukraine, UK, Switzerland, Romania, Turkey, Portugal, Slovakia, Serbia and Norway.

More than 370 major Hollywood films have been released 4DX recording successful performances at the box office, especially with the big blockbusters. For example, 4DX recorded an occupancy rate of over 80 percent during its opening weekend of Batman v Superman: Dawn of Justice in the UK.  4DX has added five more screens in the UK just this year, resulting in a total of eight screens across the country

“We are very excited [about moving] into a new market with Les Cinémas Gaumont Pathé, the leading cinema company in France,” said Byung-Hwan Choi, CEO of CJ 4DPlex. “Western Europe is a very important market for 4DX. Through our new opening, we are looking forward to further expanding our reach to additional Western European countries. We strongly believe that 4DX will offer new movie-going opportunities to French movie fans, and will gradually change the country’s movie-going trends, as well as other neighboring countries.”