Finding the Humor in Hybrid 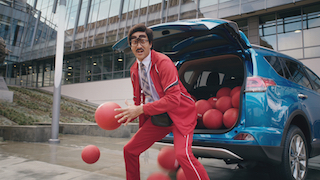 Toyota and Burrell Communications are introducing the 2016 RAV4 Hybrid with a series of broadcast commercials, web spots and video vignettes starring Keegan-Michael Key (MADTV, Comedy Central, Key & Peele and Playing House) that take a comedic approach to dispelling the misconceptions about hybrid vehicles. Bob Ackerman, creative editor, and partner at The Colonie, along with the full-service boutique’s visual FX and design team took the package from cutting through finishing.

The storyline of the campaign is driven by Key’s character, Ravelle Forman, (RAV4, get it?) a wide-eyed, slightly unhinged driving school instructor. The zealous fan of the 2016 Toyota RAV4 Hybrid has come out of retirement on a mission: To educate student drivers about a new generation of high-performance hybrids with sophisticated features that rival those of traditional vehicles - while providing a budget-conscience, environmentally friendly alternative

The :30 broadcast spot, ‘Why Wouldn’t Ya,’ establishes the premise of the campaign with an outlandish parody of driving school.

It opens with Ravelle in front of a blackboard with Hybrid Learning written in bold letters. As the bell rings, he begins the class by posing the question, “Who here wouldn’t consider driving a hybrid?”

All of the students raise their hands and respond with a litany of reasons based on misinformation about everything from style, performance and power, to maintenance and mileage.

The wacky yet well-informed instructor proceeds to enlighten his skeptical students – each with a distinct and quirky personality and style that clues viewers as to the features that they most value in a car - and assume that a hybrid won’t provide. Using references to his own beloved Toyota RAV4, a mix of visual aids and a steady stream of oddball metaphors, he presents an arsenal of facts, disproving their notions about hybrids with theatricality and unbridled enthusiasm. 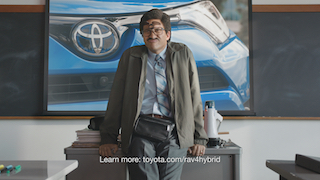 “Keegan-Michael Key is such a natural, spontaneous comedic performer that it was no surprise he delivered an abundance of golden moments to pick from, which made the editing of this campaign a joy,” said Burrell.

Director Tucker Gates (Parks and Recreation, The Office, House of Cards) at Independent Media encouraged Key and the talented supporting cast to improvise and play with material, giving the pieces an uncontrived, from the hip feel.  Burrell’s creative team took advantage of the web spots’ longer format to give Key time to play out new directions and interactions between his character and the pupils.

“The volume of spots and videos in this campaign required particularly close collaboration with the agency,” said Ackerman. “We’ve worked with Burrell on numerous projects over the years, and always find that having [executive vice president, chief creative officer] Lewis Williams and his team in the room sparks new ideas. And collaborating with them on this project was no exception.”

Each of the online spots (‘Hybrid Learning,’ ‘Acceleration,’ ‘Cost Saving,’ ‘Maintenance,’ ‘Styling,’ and ‘Mileage,’) took advantage of their longer format to give Key time to play out new directions and interactions between his characters and the pupils.  The three :15 spots, (‘Dodge Ball,’ ‘High-Price,’ and ’Teachers’ Lounge,’) featuring Ravelle will live on the Toyota Facebook page. 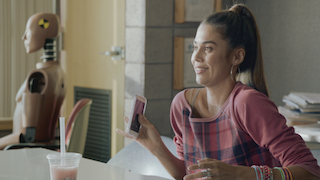 Ackerman and assistant editor Graham Chapman were on location during the production. They took advantage of the opportunity to begin editing the performances during the shoot while the footage was still fresh in their minds. The final cut, visual effects, and motion design were completed back at The Colonie’s Chicago-based boutique.

The fact that this package had so many moving parts also made it important that The Colonie’s team didn’t miss a beat. The award-winning company’s approach to project management and the level of attention its team gives to every detail were key to maintaining efficient workflow and effectively culling through the wealth of footage to create a series of videos that shared the same basic storyline without being redundant.

While the posting of the Toyota RAV4 Hybrid campaign is editorially driven, it also called for a considerable amount of visual effects. Senior VFX supervisor Tom Dernulc took an organic, natural approach when creating the “projected-look” of the videos that needed to run behind Ravelle.

“When I approach an FX shot I always keep in mind the overall needs of the project,” said Dernulc.  “The running footage on the classroom screen needed to be blended and finessed to appear natural, but at the same time, the product had to be showcased in the best possible light.”

Dernulc and assistant VFX artist, Ben Pokorny, took a very different approach to the FX created for the chalkboard sequence in the web spot, Cost Saving. The comedic fast-pace of this sequence didn’t need subtlety, which provided an opportunity to treat the FX in an almost campy manner and make them part of the comedy.

“The Colonie’s seamlessly integrated editorial, design, and visual FX services enabled our creative team to collaborate on the project through every phase of postproduction, and focus on coming up with innovate creative solutions,” said executive producer, Mary Caddy.  “A job of this scope, with so many deliverables traversing broadcast, the web, and social media, is the kind of project that really benefits from The Colonie’s turnkey approach and full- service capabilities  - and give us an opportunity to shine.”

“Editing comedy is all about accentuating the beats with pacing and rhythm, which can be a struggle if the delivery of the material isn’t spot-on,” said Ackerman. “Thankfully, the caliber of talent, performances, and creatives brought together for this job created a perfect storm - a wacky, fun, engaging storyline brought to life by a mélange of fleshed out characters that deliver the client’s message. It made cutting this campaign as much fun to edit as was to watch the final pieces.”

“We were thrilled to have the opportunity to work with Burrell on this project. Once again they pushed the creative boundaries. Everyone on the agency’s team, from creative director Lisa McConnell and writer Elyse Simpson, to art director Derrick Harmon and producer Carlo Treviso was top-notch.”

“Hybrid Learning is a great insight and concept executed brilliantly. We simply took a problem and made it the solution. The long format YouTube platform enabled us to tell a continuing story that is both entertaining and educational,” said Williams. “Special thanks to the Toyota client who understands the power of social media and Key whose comedic talent and timing is impeccable."

“There’s so much to appreciate about this package,” added the editor. “The mix of spots and videos total almost ten-minute of content, so we were able to really sink our teeth into these off-beat characters and explore comedic options that would otherwise not be possible within the confines of a traditional campaign. The web videos gave me the time needed to focus on each character’s idiosyncrasies and ethos and take their development to a whole other level. It’s rare and very rewarding to work on a project that has so much depth and ambition.”