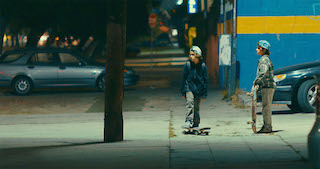 Part Vittorio De Sica’s Bicycle Thieves, part Goonies on skateboards, director Lije Sarki’s Concrete Kids tells the story of two nine-year-old boys from Venice, California who, for a contest, set off on a mission to cross Los Angeles on skateboards at night to reach the Staples Center by morning. Now streaming on Amazon Prime, the low-budget feature from The Orchard was shot by cinematographer Daron Keet with Panasonic VariCam LTs in available light mainly at night.

There were many challenges in shooting Concrete Kids, including working with child actors, who could only shoot for three hours per night. “Seventeen nights at three hours per night, that really only equals like four days of shooting,” said Sarki. “The only way we could shoot and be that mobile and fast was if we used ambient light with Daron holding the camera and using the occasional sticks for wide shots. I also didn’t want to use kids that didn’t skate because I don’t like to cheat authenticity. I didn't want to cheat the skateboarding and wanted it to feel real. I really wanted to make everything small – just a camera and someone recording sound.”

Keet said, “When Lije said he didn’t want to have a crew, I was a little gob-smacked because I’m used to having a full crew and I like using traditional film tools. I also don’t like making movies as documentaries. But I always like to push myself and have different challenges. One reason I didn’t hesitate in doing the film is that Lije is very organized. The more work you do up front, the easier the shoot will be.”

Keet shot the film with the VariCam LT who said he could not have shot the movie without it. For Keet, the look was going to be determined by the actual environment, not influenced by his lighting. 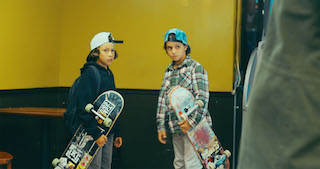 “We were working at such low light levels,” he said. “We shot in alleys that to your eye, looked black. I would just aim the VariCam down this alley and then you would see something different to what your eye was seeing. It was amazing. We even had experiences where a traffic light would change from green to red and change the illumination from a green ambiance to a red ambiance. For me it was an incredible challenge and a different way of working where I’m not just looking for opportunities for available light but I’m looking for opportunities where I’m needing the camera to find those opportunities. This camera was the only tool to have done what we did.”

“It’s really nice to have a tool where you can tell the story you want with the tools you have,” continued Keet. “A lot of people don’t like night-shooting, but I actually love it because as a DP you have more control at night because everything is turned off and you can place lights where you want. Concrete Kids was a much different challenge because I was shooting at night, but I didn’t have much control. I had to be able to see things in a different way.”

With the VariCam LT, Keet captured 10-bit 422 4K AVC-Intra files in V-Log while monitoring his footage with the Panasonic V-709 LUT. Since more than 90 percent of the movie was shot at night in available light, Keet captured at native 5000 ISO. For certain shots he even used the LT’s internal ND for night sequences where he wanted more shallow depth of field. 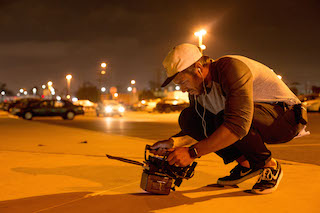 Although he stuck to mainly available streetlights, Keet occasionally used a magnetized one-foot tube light that he kept in his back pocket. “There was one scene that was very well illuminated in the background, but the foreground was dark, so I wanted to balance it out,” said Keet. “I stuck the light onto a stop sign and it balanced the light perfectly. With digital I’m pretty good at knowing what’s going to overexpose. It’s more about camera angles and always trying to have things backlit because you’re always getting enough light to bounce around.”

For lenses, Keet employed a vintage set of Super Baltar prime lenses, which the production received from Steve Gelb at LensWorksRentals.com. Keet loved how the lenses spread the light throughout the frame. “A lot of the new lights will hold the flares,” he said. “The Super Baltars spreads the flares and makes the image look really creamy and it gives you more of a rounded bokeh. If you look at anamorphic for example, it would you give you an oblong shape. With the Baltars, the iris is smooth and rounded. If you see an out of focus street lamp, the outer edge on newer glass might be sharp but with older glass, it will be much softer. A creamy look is also very forgiving on faces.”

Keet shot wide open most of the time and relied on his skill working as a focus puller years prior. Sarki also had a wireless director’s monitor so he could see check focus for Keet as well.

The film was edited by Pete Lazarus on Premiere Pro and Studio Unknown out of Baltimore did the sound mix remotely. The film was color graded by Asa Fox at The Mill LA pro bono. Fox gave Sarki a few different options for the look and Keet and Sarki would make adjustments so the film would feel consistent.

Because they didn’t have a lot of time for the color grade, Keet relied on a trick he learned to keep things moving. He and Sarki would find their favorite moment that encapsulates a certain scene and work on that color before moving on to the next scene. “When you do that, you can work pretty quickly and then just walk away, leaving the colorist to do his job since we didn’t want to waste any time.”

“So many people helped make this project work because of their contributions without financial benefit,” said Sarki. “I’m super happy with the end result.”

For more information on the VariCam LT, visit here.