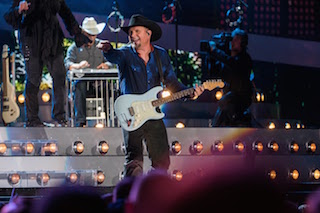 Filmworkers, Nashville, provided editorial and post-production finishing services for Garth Brooks: Yankee Stadium Live, a two-hour concert special that recently debuted on AT&T’s Audience Network. Produced and directed by Jon Small, the special, which was captured, finished and broadcast in 4K and documents the superstar musician’s two sold out shows from last summer. It was the first ever concert for a country artist at Yankee Stadium, and Brooks’ first appearance in New York City in 19 years. Filmworkers’ Adam Little edited the show; colorist Jimmy Cadenas applied the final color grade.

Both live shows were recorded by some two dozen camera operators positioned around the stadium and working with Sony 4K camera systems. Additionally, a helicopter crew captured spectacular images of the stadium and the crowds from overhead. A special stage was constructed for the performers measuring 400 feet wide, 80 feet deep and 70 feet high, and backed by a mammoth projection screen.

Small said crew spent eight days setting up for the event and that particular care was taken in positioning cameras to minimize obstructing the view of the live audience. “No one is closer to his fans than Garth,” Small said, “and he wants to be sure that everyone can see the show and can have a good time.” 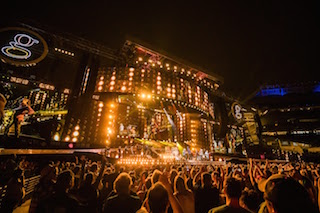 Editorial and post-production were similarly huge undertakings. The more than 100 hours of raw 4K camera media occupied nearly 80TB of central storage at Filmworkers’ Nashville facility. Engineers set up a pipeline that gave editorial and post operations equal access to source media, and allowed editorial conforming and final color grading to be conducted in 4K in real-time.

Little has edited numerous music-oriented projects for Small dating back nearly 20 years, including the 2007 Garth Brooks concert special, Garth Brooks: Yankee Stadium Live. Over that time, they have developed a close rapport. “Adam knows what I’m looking for and so there’s a comfort factor between us; we can read each other’s minds,” Small said. “I give him a lot of latitude to cut each song the way he feels is right.”

Little began the editorial process by reviewing the full 100 hours of source media and pulling selects. “I look at every camera individually rather than watching a bank of cameras simultaneously to make sure I have every magic moment,” he explained. “I pay special attention to Garth’s close-ups and facial expressions, though with Garth performing and Jon directing, so many angles are great.”

“I strive to capture the energy of the show,” Little said. “I treat the edit as another instrument to complement the music. I want you, the viewer, to feel each moment as if you are there.” 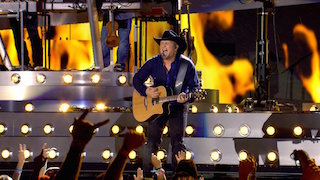 Capturing the essence of the live performance was aided by the structure of the show. It includes Brooks’ full two-hour show (with two encores) and was designed to air commercial free, without interruption.  “We used the whole show,” said Little. “Because it was airing on the AT&T Network and we didn’t need to insert breaks, the television audience was able to experience the show in its entirety. That was wonderful.”

Cadenas applied the final polish to the show in Filmworkers’ DI grading theater, using a Baselight 2 system. Working under Small’s direction, he focused on established rock solid consistency between the many camera sources and drawing out the mood and intensity of the live event.

“I wanted it to look the way that I saw it live—the colors, rich; the blacks, really black,” said Small. “No show looks quite like this. It is as colorful as it can be from the stage to the projection screen to the lighting. It’s just amazing.”

Cadenas focused a lot of attention the crowd. “We wanted to bring out as much detail as we could from crowd shots while preserving some of the darkness, which is important to the ambience of the show,” he explained. “We also wanted to be sure that Yankee Stadium looked good. Matching levels between the various cameras and getting the crowds right was intricate work.”

Although the project marked Filmworkers, Nashville’s first long-form 4K project, the finishing process proceeded without a hitch. “We were able to do the cut, final color correction and deliverables as easily as if it were a standard project,” Cadenas said. “There is a big demand for quality 4K material and we are ready to meet it. We’re far ahead of the curve.”