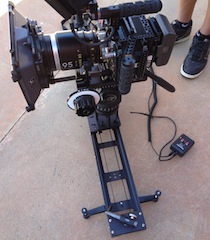 “Cine prime lens swaps are usually the freight train of small documentary productions,” Nothing Films founder Rob Macey says. “For the film style in this beautifully touching and visually informative tourism film for the City of San Luis Obispo, California, I knew we wanted to re-create and capture the slow-paced yet fun nature of the city. However, since half of the shots were captured as they happened, we had to move fast like I’m used to working. Having to constantly swap prime lenses would cause us to miss moments, the perfect light, and generally slow us down.

Macey chose a small camera package, which included the Red Epic at 5K with mostly 120fps slow motion shots. He used Schneider Cine-Xenar III 25, 35, 50, 75, and 95 lenses, a Chrosziel matte box and follow focus, Sachtler sticks, a nine-inch touch monitor, a Kessler CineSlider, and a monopod. “The Cine-Xenars are small enough to not dread lugging them around at all,” he says. “Small is big. I like to anticipate moments. There’s no better feeling for me than when the moment you want actually happens and you and your team are ready for it.

“I can’t say enough about the new Cine-Xenar’s,” he adds. “They are beautifully matched lenses that are lightweight, very sharp (with geared rings that match from lens to lens) and they are optically crisp. This helps small productions like ours make the day. They hold the light in such a natural way —it’s hard to describe.”

Macey went for a softer look on this project by keeping some shots purposefully just out of focus while shooting wide open. For one particular shot, the team was inside the Madonna Inn Spa. “I saw this translucent gold curtain with the pool behind it,” he recalls. “It was just beautiful looking by itself. So, I asked my AC to put a Cine-Xenar 75mm on the Epic and had our producer, Jennifer Jordon, wave her hand across it as our grip splashed water around the pool to make it sparkle. We shot at 120fps. Within a minute of the set-up, I shot it and it was gorgeous. Done. Next shot. Great teamwork.”

At another moment, Macey found a backlit bridge with trees and foliage surrounding it. He saw an older couple having lunch and thought it would be so picturesque and meaningful to have them walk across the bridge. “No direction. They can just walk and we will see what happens,” he explained to the crew. “They agreed. So, my AC put a Cine-Xenar 50 on the camera and we set up quickly. The couple were 90-years-old, so we were easily ready within a minute for them. Not only did they walk across it, they held hands and kissed in the middle. Great moment!”

Macey admits that as a photojournalist, he is used to working with ENG lenses, so at first, the Cine-Xenar lenses seemed like a crutch. “But, when I was shooting beautiful flowers, I loved how the Cine-Xenar’s focused only an inch or two from the lens. Built-in macro. The 25mm focuses down right in front of the lens. I love that.

“I also like to shoot close to my subjects as much as I do from a distance for different reasons,” he adds. “These lenses allowed me the freedom to do both and not be bogged down with lens changes.”

Macey has shot thousands of TV show segments and elements, ranging from Dateline NBC to Dancing with the Stars. He’s won 13 Emmy Awards, and was a staff TV news photojournalist for many years. In 2000, he started Nothing Films, which produces creative content using the Red Epic. The San Luis Obispo project can be seen on Vimeo at https://vimeo.com/71327906.