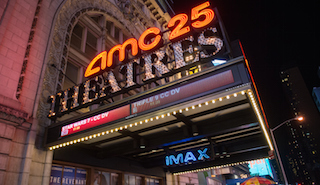 AMC Theatres and Dolby Laboratories have opened the 50th Dolby Cinema at AMC at AMC Rosedale 14 in Roseville, Minnesota. “Reaching the major milestone of 50 Dolby Cinema at AMC locations is a direct result of the outstanding reaction we have received from moviegoers nationwide,” said Doug Darrow, senior vice president, cinema business group, Dolby Laboratories. “Our fast-paced growth is a testament to the shared commitment by Dolby and AMC to deliver movie lovers a best-in-class entertainment experience.”

“Our guests enjoy the premium experience that Dolby Cinema at AMC provides, and now more guests will be able to experience the amazing slate of titles scheduled to be released in 2017,” said John McDonald, executive vice president, US Operations, AMC. “This next-generation cinema is leaving moviegoers impressed, thrilled, and excited by what they see, hear, and feel—all from the comfort of their reclining chairs.”

Many of 2017’s most anticipated releases will be shown in Dolby Vision and Dolby Atmos at Dolby Cinema at AMC locations across the United States, including Warner Bros. Pictures’ Live by Night, due out January 13; Paramount Pictures’ xXx: Return of Xander Cage, due out January 20; Legendary/Universal Pictures’ The Great Wall, due out February 17; Disney’s Beauty and the Beast, due out March 17; Marvel’s Guardians of the Galaxy Vol. 2, due out May 5; Disney’s Pirates of the Caribbean: Dead Men Tell No Tales, due out May 26; Warner Bros. Pictures’ Wonder Woman, due out June 2; Disney•Pixar’s Cars 3, due out June 16; and Focus Features’ The Coldest City, due out August 11.