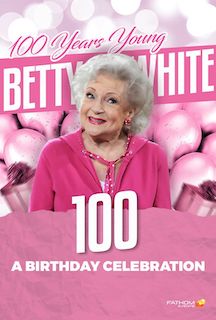 Betty White, who died on December 31, 2021, and was one of America’s most beloved stars, would have turned 100 years old on January 17th. To mark that momentous milestone, Fathom Events planned to celebrate the day with a once-in-a-lifetime event: Betty White: 100 Years Young—A Birthday Celebration. What had once been seen as a joyous occasion will now be a bittersweet remembrance of a life well-lived.

White granted exclusive access to filmmakers Steve Boettcher and Mike Trinklein in the making of this special movie event.  It offers a revealing glimpse into her life—behind-the-scenes on set, working with her office staff, entertaining at home, lending her voice as an animal advocate and, we join her at her actual birthday party, as she celebrates the big day with a star-studded cast of friends that love her.  Special guests include Ryan Reynolds, Tina Fey, Robert Redford, Lin Manuel- Miranda, Clint Eastwood, Morgan Freeman, Jay Leno, Carol Burnett, Craig Ferguson, Jimmy Kimmel, Valerie Bertinelli, James Corden, Wendy Malick, and Jennifer Love Hewitt among many others.

Betty White: 100 Years Young Birthday—A Birthday Celebration is packed with clips from some of Betty’s most famous roles, including the innocent Rose on Golden Girls, her celebrated host gig on Saturday Night Live – one of the highest rated SNL episodes ever – her award-winning Super Bowl/Snickers commercial, the worldly Elka on Hot in Cleveland, her role as the bawdy Sue Ann on The Mary Tyler Moore Show and numerous other career highlights. Also included is a lost episode from Betty’s early sitcom from the 1950’s.

According to White herself, “Who doesn’t love a party?!?  This one is gonna be great!” Says the film’s producer and director, and a long-time chronicler of Betty’s life, Steven Boettcher, “We didn’t want this day to pass without bringing together all the people that love her, from her co-stars and friends to her many millions of fans of all ages, to celebrate her 100th birthday with an entertaining and loving look at what makes Betty a national treasure.”

“Betty White is a beloved cultural icon. We couldn’t be more excited to celebrate this milestone birthday with her and fans around the county,” said Daren Miller, Fathom Events vice president, programming, strategy & business affairs.