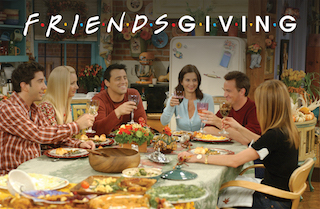 Fathom Events continues its celebration of Friends’ 25th anniversary by bringing eight Thanksgiving-themed episodes of the legendary series to movie theaters across the U.S. over two days: November 24 and November 25. Each day will feature four unique episodes that have been newly remastered in 4K from the original 35mm camera negative.

Friendsgiving will reunite fans with their longtime BFFs — Ross, Rachel, Joey, Monica, Chandler and Phoebe — to re-live some of their funniest moments. Fans will watch as Monica puts a turkey on her head, Rachel makes a curious trifle cake, Ross reveals an old secret, Chandler declares his love for Monica, Joey tries to devour an entire turkey, and Phoebe exposes something curious about Chandler’s canine allergy.

A favorite among critics and fans alike throughout its 10-season run, Friends not only won the Emmy for Outstanding Comedy Series, but also garnered Emmy Awards for series stars Jennifer Aniston and Lisa Kudrow. Friends was created by David Crane and Marta Kauffman, who executive produced the series with Kevin Bright through Bright/Kauffman/Crane Productions in association with Warner Bros. Television. A cultural phenomenon, Friends has built a legacy of devoted fans that has spanned over 25 years.

In September, Fathom Events and Warner Bros. presented Friends 25th: The One With The Anniversary, which attracted more than 230,000 fans to movie theaters nationwide. The three-night celebration grossed an estimated $2.9M across all dates, making it the second highest-grossing U.S. event cinema release of 2019.

“Fans showed up in full force for our initial Friends screenings, so we know there is demand for more,” said Fathom Events CEO Ray Nutt. “We’re excited to put eight classic episodes on the big screen for fans to celebrate with their friends, just in time for Thanksgiving.”

Warner Bros. Television Group president & chief marketing officer Lisa Gregorian said, “Fathom’s events offer our incredible Friends fans an opportunity to enjoy a shared viewing experience. These Thanksgiving-themed episodes were digitally remastered for theaters and we hope the fans enjoy coming together to feast on these classics and celebrate with a Happy Friendsgiving.”