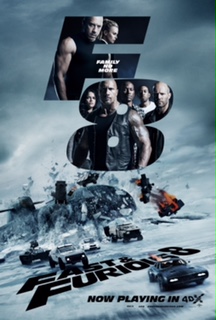 The Fate of the Furious is the most watched 4DX film of 2017, and is expected to surpass the 1.5 million-attendance mark. The box office success was driven by the best opening week performance in 4DX history, reaching 760,000 moviegoers – 31 percent more than the first week attendance for 2015’s Star Wars: The Force Awakens (580,000) in 2015.

The 1.5 million-4DX admissions milestone has only previously been achieved by Star Wars: The Force Awakens (1.8 million). Four other films have exceeded one million 4DX admissions: 2015’s Jurassic World, Furious 7 and Avengers: Age of Ultron, and 2016’s Captain America: Civil War.

In overall worldwide success, The Fate of the Furious had the biggest global opening of all time with $542 million in global box office performance. As a result, The Fate of the Furious today ranks as the third most watched 4DX film of all time, trailing close behind Star Wars: The Force Awakens and Jurassic World. The film, starring Vin Diesel, Dwayne Johnson, Jason Statham, Michelle Rodriguez, Tyrese Gibson, Kurt Russell, and Charlize Theron, and directed by F. Gary Gray, is currently continuing its run in 4DX theatres around the world.

The Fate of the Furious in 4DX was highly anticipated, following the success of Furious 7 in the immersive format, which features motion seats and environmental effects that bring moviegoers into the action. The previous film in the saga recorded more than 1.2 million 4DX attendees, with a $14.7 million worldwide gross at the box office, making it a top five-4DX title. This feat was greatly impacted by the remarkable success of Furious 7 in the U.S., Europe, and Asia.

“The films in this series have been perfect matches for 4DX and, in addition to the box office success, have led to incredible feedback from global fans,” said Byung Hwan Choi, CEO of CJ 4DPlex. “The film’s car heavy action scenes, in conjunction with the 4DX motion synchronized seats, allow moviegoers to feel and experience an unmatched immersive experience that stretches their imagination and draws them into what’s on screen.”

The Fate of the Furious sped off to a great start with a remarkable opening weekend across several countries around the world. In France, it delivered an average occupancy rate reaching nearly 100 percent, virtually selling out during opening weekend and throughout the first two weeks of the film’s 4DX run.

The Fate of the Furious in 4DX attracted fans’ attention with an immersive cinema experience that transcends traditional theatre viewing. This includes motion-activated seats perfectly synchronized to the onscreen car chases, the use of fog during scenes on ice roads, as well as the use of snow in the auditorium for scenes set in Russia.

Following the success of Fate of the Furious, Universal’s The Mummy will be premiering in 4DX this summer at 4DX locations worldwide. The Mummy is directed by Alex Kurtzman and stars Tom Cruise, Sofia Boutella, Annabelle Wallis, Jake Johnson, Courtney B. Vance and Russell Crowe.