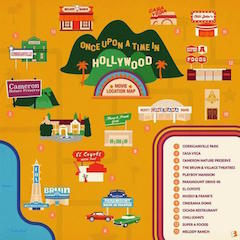 Quentin Tarantino’s Once Upon a Time in Hollywood is leading the weekend’s ticket presales on Fandango and has outsold Tarantino’s previous titles in Fandango’s advance ticket sales. To celebrate the its release Fandango is launching a map of the film’s L.A. locations, while Fandango’s on-demand video streaming service, FandangoNOW, is hosting a playlist of movies that Quentin Tarantino screened for his crew to help inspire the ‘60s vibe of the film.

“A love letter to old Hollywood, Once Upon A Time is the kind of film writer-director Quentin Tarantino was born to make,” said Fandango managing editor Erik Davis.” Not only does it feature two of Hollywood’s biggest icons, Leonardo DiCaprio and Brad Pitt, starring opposite one another for the first time in a feature film, but they are surrounded by a tremendous ensemble cast who truly bring a Hollywood era long gone back to life in glorious big-screen fashion. Like Tarantino’s best work, you’ll want to watch it again and again.”

You can find the movie map here and the FandangoNOW playlist here.