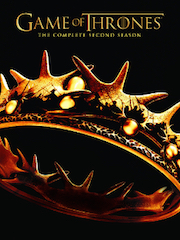 FandangoNow is distributed on an installed base of more than 100 million devices, including Smart TVs, over-the-top streaming players, video game systems, iOS and Android mobile phones and tablets, and online. FandangoNow customers will be able to purchase individual episodes and seasons of premium HBO content, including:

Drama series Game of Thrones and The Sopranos

“HBO is synonymous with high-quality programming," said Adam Rockmore, chief marketing officer, FandangoNow. "By selling HBO's original content, including award winning series like Game of Thrones and more in the coming months, FandangoNow continues to expand the breadth and scope of quality entertainment available to its customers to enjoy anytime and from anywhere."

“Fandango is a leader in the category for their ability to market to entertainment enthusiasts through their digital network,” said Sofia Chang, executive vice president, worldwide digital distribution, HBO.  “This partnership allows us to expand our offering to HBO fans across a wide variety of devices.”

More programs will launch in the coming weeks and months, including Ballers, Silicon Valley, Veep, True Detective, The Newsroom and many more.