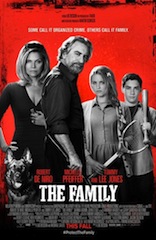 This movie just kind of loops along with a loose-limbered plot that’s a little bit fun, a little bit suspenseful, a lot violent, mostly entertaining.  And, once again, Robert De Niro’s work seems so effortless that he makes everyone else’s performance better. Borrowing its storyline – a family in the Federal Witness Protection Program, hiding out from the Mob – from other movies, it seems intent on providing characters and situations that are unique and letting everything build from there.  And it does. This is the story of the Manzoni family; they ratted out the Mob and now they’re now hiding out in Europe.  They’re on the run because they keep drawing attention to themselves, mostly because they each have a short fuse.  That creates situations that poke fun at the French – and right back at the Americans (the director, Luc Besson, is French) with some good bits – including De Niro serving as a film critic in a French debate on a Martin Scorcese film.  In the end, the blood flows and the bodies mount up, but until then, this movie offers enough goofiness, enough unpredictable moments, and interesting performances to be entertaining.  And, as his son Warren says about De Niro’s character, no one has ever used the ‘F’ word to express himself so fully in so many different situations.