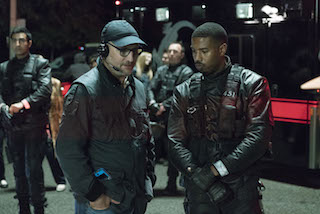 Written during the McCarthy era and published in 1953, Ray Bradbury’s classic dystopian novel, Fahrenheit 451, is set in a society where books are outlawed and firemen are charged with burning them. The novel has had many adaptations, most famously in François Truffaut’s 1966 film, which starred Oskar Werner and Julie Christie. In 2018, Ramin Bahrani co-wrote and directed the film adaptation for HBO, starring Michael B. Jordan, who also served as executive producer. The stylized film was shot by cinematographer Kramer Morgenthau, ASC (Game of Thrones, Thor: The Dark World, Terminator Genisys).

“I’m a huge fan of the book and a big fan of Truffaut in general,” says Morgenthau. “I’m also a big fan of films that have deep messages, or socio-political meaning to them. That’s what originally attracted me to making films and documentaries.”

Morgenthau grew up in Cambridge, Massachusetts and started out shooting documentaries in New York City. He attended the University of Rochester majoring in film studies. “I came out of school bright eyed and bushy tailed and wanted to make films that could change the world,” he says.

For Morgenthau, Fahrenheit 451 brought him back to his early roots as a filmmaker and awakened his artistic sensibilities, as well as his passion for film. “Literature and art are a valuable part of our culture that we sometimes take for granted,” he explains. “There are things that should be cherished and protected. Also, Ramin is a passionate filmmaker and has made a lot of amazing independent films like Man Push Cart, Chop Shop, and 99 Homes. They’re all strong films that are purely about story and character, not spectacle. When reading the script, Fahrenheit 451 seemed to me like one of those films.”

The biggest challenge for Morgenthau was building a new world from scratch. (He joined the production 10 days before the start date.) With so little time, he relied on his filmmaking instincts instead of watching other movies or looking at art and photographs. “There are technology and the science fiction elements, but it’s not really a futuristic film since it happens in the present in sort of an alternate universe. Just to capture all of that and build a world from scratch and build it in a short period of time.”

Morgenthau shot the film with VariCam 35 cameras, capturing 12-bit 4:4:4 AVC Intra files in 23.98-fps. HBO does not have a 4K mandate but 2.40 widescreen is not allowed so he captured UHD (3840 x 2160) in the 16x9 aspect ratio. “I literally got off the plane and started scouting locations and talking with Ramin about what he wanted to do,” says Morgenthau. “He wanted to freely move the camera 360-degrees and shoot exteriors in urban areas at night. I had heard a lot about VariCam and my gut instinct told me that it was the way to go because of its low light sensitivity.” 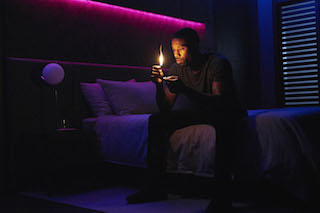 Since shooting digital, Morgenthau had primarily shot with one camera system so and he thought the VariCam would be a challenge to himself to try something different. “I wanted to give Ramin the most freedom as possible,” he explains, “especially being able to shoot at super high ISO settings – from the 3200 – 5000 range. I tested it and was absolutely blown away by the VariCam’s low light capabilities. It also has a different look that helped with the technology aspect of the film.”

During production, Morgenthau captured in V-Log and he and used a simple Rec709 LUT that was created by Technicolor-PostWorks NY. “On top of that I used CDLs,” he says. “We had no colorists at the lab – it was just a straight transcoding and conversions from what we were doing on set. D.I.T. Jasper Vrakking did a great job with color.”

When Morgenthau was shooting on stage, he generally shot at 800 ISO. For the majority of low light night exteriors, Morgenthau did not utilize native ISO 5000, but instead chose base 5000 and dialed down to 3200 because he felt the 3200 matched the clean 800 best. “I didn’t need that extra 2/3rds of a stop,” explains Morgenthau. “There’s so much light at 3200 because I was shooting with very fast lenses that could open to a 1.4.” Morgenthau shot with a Panavised set of Super Speeds from the ‘70s and felt the vintage glass was a good way to combat the sharpness of digital when compared with film. He generally shot at a T-2.

“Shooting fire scenes were trickier than I was expecting,” he says. “I wanted to pick up the most light I could at night but at the same time I had to hold the detail in the fire, so it was a constant dance between holding fire detail and keeping enough light on the faces. We had to ride the iris on the fly a lot. When I shot on set and when I shot outside, I did very little background lighting. I let all the existing lighting play and I would turn off all the existing lights in the foreground and I did localized lighting on the faces using Moon boxes with a lot of Sky Panels and LEDs at very low levels to balance to the ambiance.” 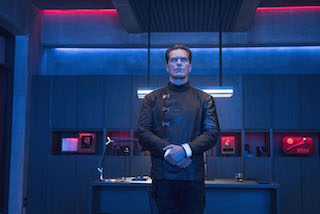 One of the most complex sequences to shoot took place in a “VR bar”, which contained a number of panels and video walls. Morgenthau lit the scene with LEDs that were being fed video media. Morgenthau also had a number of tube shaped fixtures that were shaped like fluorescent tubes but were pixel mapped. “They’re called Sceptrons made by Martin,” explains Morgenthau. “We just tried to rise to the level of the script and the actors so we came up with something that looked different. I was really happy with that sequence. It was challenging and exciting.”

Since it was a futuristic world, production design and gaffer Mike Hall built RGBAW LEDs into many of the sets. “I lit this differently, more of an ambient look, not because of the camera’s sensitivity,” continues Morgenthau, “but because of the style of the movie. I was embracing the technology. I lit the opening scene of the movie with just a match with our lead actor’s hands. He lights it and it lights up his whole face. There’s a couple of LEDs that are built into the room that are glowing but I literally lit Michael B. Jordan’s face with a single match at a 1.4 at 3200 ISO. It was blooming hot and beautiful.”

Fahrenheit 451 was posted at Technicolor-PostWorks NY and was graded by colorist Tim Stipan. The grade resembled the dailies for the most part, although Morgenthau says they did do some “massaging and shaping” of the image.

Overall, Morgenthau was extremely happy at how the project turned out. “It’s one of my favorite things I’ve shot,” he says. “The VariCam sees colors different from other camera systems and has a very different color space. I use a lot of very saturated colors again using RGBAW LEDs that were built into the sets – a lot of really deep saturated reds and blues and greens. I really thought it saw the colors in a more true and naturalistic way. Really gorgeous.”